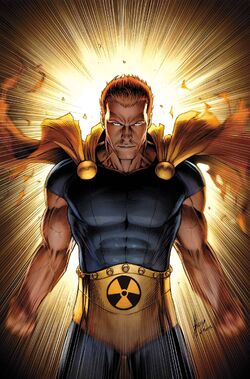 Let me tell you something... Keep doing what you're doing, even if people will tell you that you shouldn't. Don't listen to anyone who disagrees with you, because what you are doing is the right thing and that is what's mostly important in our lives... What you did today, was beyond amazing...

The cosmic being that would become known as Hyperion came to Earth as a baby, later revealed to be Zor-Ran, was sent by his parents as the only survivor of the race of Eternals from a dying world. A human supposedly named "Father Milton" had raised him under the civilian name of Marcus Milton, teaching him the righteous morals and etiquette of human society. As an adult he became the superhero known as heroic Hyperion, and protected the world from many potential international and extraterrestrial threats along a team of superheroes he mostly trusted known as the Squadron Supreme.

During his early career as a hero, Hyperion battled several villains such as the infamous mastermind Emil Burbank, and also formed a lasting friendship and frequent alliance with fellow costumed hero Nighthawk and joined him and others in eventually forming the Squadron Supreme. In his adventurous missions with the Squadron, Hyperion clashed with such foes as their immoral, ruthless counterparts known as the Squadron Sinister and the fear-consuming universal entity often known as "It. Unfortunately, the state of the Squadron Supreme has eventually collapsed especially their battle with the Black Sun on Atomic City has caused a breaking point, forcing the team to reluctantly disband for a while due to the threatening demands of the United States Government for causing countless destruction across different parts of the globe and unwillingly creating casualties along the way.

However, Hyperion's responsibility as a lone planetary guardian has come into challenged when the last Eternal war criminal and long lost uncle of Marcus Zhib-Ran, known by his moniker as the "Scoundrel," and his forces had arrived on Earth in the intent to terraform the planet into the previous world of Eternals, they once have lived in. Zhib-Ran and his companions escaped the destruction of their planet and spent the next three decades years traveling to the outposts of the planet's ancient empire before becoming aware of where Marcus and the Terraformer had been sent by Marcus' parents.

Though initially unwilling to expose himself to the yellow sun of Earth, the Scoundrel is shown to be able to master his newly-gained powers, in only a matter of minutes, the same powers Marcus spent years in unlocking from the exposure. Zhib-Ran reveals to Clark Kent how he and his team were able to acquire a "world engine" device, scouted unsuccessfully for the surviving Eternal colonies, and traveled to Earth. He then reveals his plan to terraform the planet with the world engine and use The Seeds of Life and Death (that Zor-Ran's father has placed within his individual cells as a baby) to repopulate the world with genetically-engineered Eternals, which would definitely kill all of Earth's indigenous life in the process.

The Havoc of Hyperion

The Scoundrel finally releases the world engine on Metropolis and over the Indian Ocean to begin terraformation, but Marcus destroys the device while the United States Military use a series of their once-classified aircraft carriers called the Helicarriers, as an airstrike device in counteracting against the Scoundrel's fleets, forming a heroic alliance that destroyed the enormous main Eternal vessel and apparently obliterated most of the Scoundrel's fleet (with the exception of the Scoundrel, Hyperion, and a few Eternal survivors handed over custody), foiling half of the Scoundrel's destructive plans. Enraged at the ultimate defeat of the remainder of his colony and the death of his wife and second-and-command, Zhib-Ran engages Hyperion in an even, catastrophic fight throughout Cosmopolis, unintentionally causing thousands of casualties, causing for Marcus to battle him briefly in space before driving him straight into the Earth's atmosphere.

Zhib-Ran's advantages, combat experience and training, were eventually outmatched by Hyperion's superior adeptness to his powers and higher solar energy supply. Eventually, Hyperion gets the upper hand and subdues the Scoundrel in combat, but the Scoundrel's world engine was revealed to be still functioning albeit on the fact that the Eternal vessel was already destroyed, and had kept on running as long as Zhib-Ran's heartbeat keeps on fluttering, meaning that the terraforming would never, ever stop as long as the Scoundrel would be still alive, forcing Hyperion to reluctantly snap Zhib-Ran's neck in order to save the entire planet from being decimated and re-created, forcibly killing his own uncle in the finale, just so he could save all of the Earth's population, much to Hyperion's own dismay. Even before he was forced to kill his own uncle, he remembered something from Zhib-Ran's last words that revealed his original birth name, Zor-Ran.

In the wake of the event's aftermath, a few of his old teammates have continuously supported Marcus, who apparently has gained a serious case of PTSD since he was forced to put an end into his own, despite his point that he didn't deserve to die no matter how genocidal or deadly he was, no one else did whose deaths during his havoc on Cosmopolis who he had held responsible for. During his long while absence as the once-heroic Hyperion, has also made him question his purpose and reason on why he decided to become a heroic protector of Earth, conflicted by his realization that he was being too irresponsible and even letting his reckless powers couldn't be uncontrolled by others, not even by himself.

Years have passed by, the Squadron Supreme was already scrapped and the first secret incarnation of the team was disbanded by the president, believing that each and every superhero would be better on their own without them having to be involved with the government's classified agendas, but due to the unexpected arrival of the mysterious, enormous, and powerful extraterrestrial entity known as the Null the Living Darkness, the authorities had no other choice but to reassemble the superhero team of the Squadron, for the sake of defending the world and preventing the planet from the most dangerous of threats, no single hero alone could ever handle in defeating.

Finding themselves in another Earth, the Squadron were obligated to team up with the Avengers, that very Earth's mightiest defenders. On a side note, this would also be the first time this reality had truly visited another reality despite already acknowledging its existence, along with the proper introduction of the multiverse to the heroes and villains of the reality that they've visited. During their stay on the foreign Earth, Zor-Ran met with the Avengers at their main headquarters, in which he developed into knowing and earning their trust, contrast to his overtly-vigilant and paranoid teammate Nighthawk who couldn't seem to trust any single person and group that they've met, "good" or "bad," in the different world that they've visited. Such tense disagreement between the two momentarily shattered their already distant relationship into a feud about who to trust, with Nighthawk bitterly looking back at the reason why the Squadron never worked out in the first place, arguing that Hyperion "blind trust and hope" in humanity has what led him into despair during the Battle of Cosmopolis the disbandment of the Squadron.

The two ideally-conflicted heroes instinctively fought throughout the Avengers facility over the Squadron's leadership, but such incident was thankfully intervened by its heroic residents, most notably Spider-Man, before anyone else at the area could've gotten hurt. At that moment, it was the web-slinger's selfless and noble act that made the two realize what it truly takes to be a hero. After their preposterous duel, Hyperion and Nighthawk simply hung out and reminisced their old days when the Squadron first had its adventures, making an amending and forgiving truce and subsequently concurred on the optimistic reality that maybe the mutual trust and unity of the Squadron's members makes it work rather than just having one or two leader to guide them most of the time. While also agreeing that bringing the Squadron Supreme back together may or may not bring things back to the way they were, they rest assured to do their very best to be better in facing threats and protecting the innocent through each other's trust as a team of heroes once again by the moment they return home.

By the climactic finale of their journey on what would be dubbed as Prime Earth, the Squadron Supreme, S.H.I.E.L.D., and the Avengers took their stand to confront and exile Null out of to prevent it from consuming other universes, including their own. In the end, the heroes of both worlds were able to banish the Living Darkness into the unknown abyss of the multiverse, thanks to their greatest, dangerous living weapon: the Void, an "inner demon" which possesses the psychologically-conflicted veteran hero Robert Reynolds, a man whose strength rivaled Hyperion's since the latter was on a foreign Earth.

Eternal Physiology: Hyperion's unique physiology is common among the Eternals. His body collects cosmic radiation and operates in a process similar to nuclear fusion, specifically processing and gaining nourishment from solar photon particles. As a result, he possesses various superhuman attributes. He is considered as an Omega-Level Threat by most sources stored by the information of several agencies and organizations, not only the ones on Earth, but also across the entire known intergalactic community.

Retrieved from "https://marvelcomicsfanon.fandom.com/wiki/Zor-Ran_(Earth-61712)?oldid=264487"
Community content is available under CC-BY-SA unless otherwise noted.