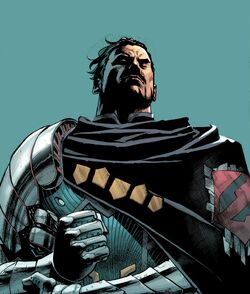 There's only one way this will end, boy... Either your whole world dies, or I do! Your choice!...

General Zhib-Ran, often called by the Eternal Council as his infamous title known as the Scoundrel, is a former Eternal military general and an archenemy and rival to his own brother, the undisclosed father of Zor-Ran, who later became Hyperion. Exiled to the unstable wormhole known as the Gates of Grim by the Eternal Council and his people for treason, he survived the destruction of their homeworld, which something that Zhib-Ran and his crew had always been aiming to prevent until their imprisonment, and swore revenge against the son of his own brother and his nephew, after discovering the revelation that he had survived his supposedly inescapable fate during the planet's destruction.

However, the heroic Hyperion's responsibility on Earth, as a lone planetary guardian has come into challenged when the last Eternal war criminal and long lost uncle of Marcus, Zhib-Ran and his militia forces had finally arrived on Earth in the intent to terraform it into the previous world of Eternals, the same world they once have lived in. Explaining his background to his long lost nephew with his attempt to manipulate him to join their side, Zhib-Ran and his companions were able to escape the impending destruction of their planet and spent the next three decades years traveling to the outposts of the planet's ancient empire before becoming aware of where Marcus and the Codex had been sent by the latter's parents.

Though initially unwilling to expose himself to the yellow sun of Earth, the Scoundrel is shown to be able to master his newly-gained powers, in only a matter of minutes, the same powers Marcus spent years in unlocking from the exposure. Zhib-Ran reveals to Clark Kent how he and his team were able to acquire a "world engine" device, scouted unsuccessfully for the surviving Eternal colonies, and traveled to Earth. He then reveals his plan to terraform the planet with the world engine and use The Codex (that Jor-El placed within Milton's individual cells as a baby) to repopulate the world with genetically-engineered Eternals, which would definitely kill all of Earth's indigenous life in the process.

The Scoundrel finally releases the world engine on Metropolis and over the Indian Ocean to begin terraformation, but Marcus destroys the device while the United States Military use a series of their once-classified aircraft carriers called the Helicarriers, as an airstrike device in counteracting against the Scoundrel's fleets, forming a heroic alliance that destroyed the enormous main Eternal vessel and apparently obliterated most of the Scoundrel's fleet (with the exception of the Scoundrel, Hyperion, and a few Eternal survivors handed over custody), foiling half of the Scoundrel's destructive plans. Enraged at the ultimate defeat of the remainder of his colony and the death of his wife and second-and-command, Zhib-Ran engages Hyperion in an even, catastrophic fight throughout Cosmopolis, unintentionally causing thousands of casualties, causing for Marcus to battle him briefly in space before driving him straight into the Earth's atmosphere.

Zhib-Ran's advantages, combat experience and training, were eventually outmatched by Hyperion's superior adeptness to his powers and higher solar energy supply. Eventually, Hyperion gets the upper hand and subdues the Scoundrel in combat, but the Scoundrel's world engine was revealed to be still functioning albeit on the fact that the Eternal vessel was already destroyed, and had kept on running as long as Zhib-Ran's heartbeat keeps on fluttering, meaning that the terraforming would never, ever stop as long as the Scoundrel would be still alive, forcing Hyperion to reluctantly snap Zhib-Ran's neck in order to save the entire planet from being decimated and re-created, forcibly killing his own uncle in the finale, just so he could save all of the Earth's population, much to Hyperion's own dismay.

Despite the defeat and death of Zhib-Ran, his wouldn't have stop on haunting all the deepest parts of Marcus' nightmares, wherein a hallucination of Marcus' fallen uncle would taunt him that even though he was able to save his planet from ultimate destruction, none of it would ever change the fact that he had turned Marcus into a killer, along with the fact that Marcus had gained a serious case of PTSD because of this, since he was forced to put an end into his own uncle, despite his point that he didn't deserve to die no matter how genocidal or deadly he was, no one else did whose deaths during his havoc on Cosmopolis who he had held responsible for.

During his long while absence as the once-heroic Hyperion, has also made him question his purpose and reason on why he decided to become a heroic protector of Earth, conflicted by his realization that he was being too irresponsible and even letting his reckless powers couldn't be uncontrolled by others, not even by himself. Along with it, Ran's preserved corpse was taken by the scientific genius and infamous businessman Emil Burbank and put him in suspended animation inside his secret laboratory, due to reasons yet to be revealed.

Eternal Physiology: The Scoundrel's unique physiology is common among the Eternals. His body collects cosmic radiation and operates in a process similar to nuclear fusion, specifically processing and gaining nourishment from solar photon particles. As a result, he possesses various superhuman attributes.

Retrieved from "https://marvelcomicsfanon.fandom.com/wiki/Zhib-Ran_(Earth-61712)?oldid=264444"
Community content is available under CC-BY-SA unless otherwise noted.