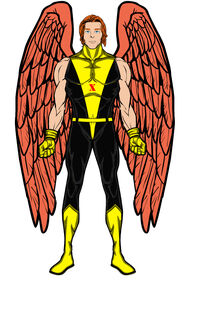 Red
Unusual Features
Red wings on his back. Scar in the area near his heart. Wing shaped tattoo on his right arm
Status
Citizenship

Retrieved from "https://marvelcomicsfanon.fandom.com/wiki/Zechariah_Guthrie_(Earth-515)?oldid=255845"
Community content is available under CC-BY-SA unless otherwise noted.