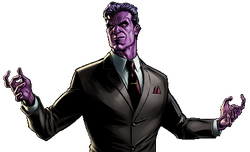 Born in the 1970s to parents Albert and Louise, Zebediah Kilgrave quickly developed a serious brain malfunction which required a great deal of treatment. Kilgrave spent much of his young life going through seemingly never ending tests alongside extremely painful treatments, including spinal fluid extractions. These experiences caused Zebediah to hold a great resentment towards his parents for never showing him affection and instead concentrating purely on their work. Eventually he developed the power to control people's wills and make them do as he commanded with ease.

We carried out his every childish demands for years."
"He was throwing a tantrum, but I was busy ironing and... I, I never should have yelled at him but...

Kilgrave forced his parents to obey his every command, using them as his personal slaves and slowly developed a complete lack of empathy for the human need, focusing entirely on his own desires and pleasure from other people's suffering. Eventually, at the age of ten, he forced his mother to burn her face with an iron, permanently scarring her. Due to fear for their own lives, his parents abandoned Kilgrave and left him to fend for himself for the next twenty years, using his powers to force others to give him food and shelter.

Beginnings of an Obsession

Here I am, just debating where to eat and then BAM, there you are, performing feats of heroism. Come here, let me look at you, come on. Jesus you're a vision, hair and the skin, appalling sense of fashion but that can be remedied... But underneath it all the power, just like me. Though not quite as good, of course.

While walking through New York City, Kilgrave witnessed Jewel display her incredible strength while saving Malcolm Ducasse from muggers. Fascinated by Jones' powers, Kilgrave focused his attention on Jones, asking her about her incredible powers.

He commented on what a beautiful woman Jones was, although he was not fond of her clothing and asked if she enjoyed beating up the thugs who were attacking Ducasse. Jones told Kilgrave that she did because it made her feel like she was making a difference in saving him like the Avengers, something Kilgrave struggled not to laugh at. Changing the subject, Kilgrave ordered Jones to smile before taking her under his control and ordering her to join him for dinner at Niku, telling her that she would enjoy Chinese food with him. The pair then left together, leaving Ducasse bleeding on the floor.

Over the next few months Kilgrave kept Jones as his mental prisoner. Although he viewed their extended period of time together as a real and loving relationship, he constantly used his powers to force her to spend time with him, care for him and have sex with him. When Trish Walker would call Jones to ensure that she was alright, Kilgrave ensured that Jones explain that everything was fine. Kilgrave would treat her to dinner and use his vast wealth to stay in five star hotels, including the Plaza Hotel; however it would constantly be his powers keeping her by his side, not Jones' own free will.

Wishing to test if Jessica Jones wanted to stay, he gave her no orders for twelve hours, the amount of time for someone to fall out of his control. However he found Jones had decided to not leave him, allowing him to believe that she truly did love him. He found Jones standing on a balcony and ordered her to step down; when he questioned why she initially had not listened to him, he decided to punish her by ordering her to cut off her own ear. When she began to obey Kilgrave changed his mind and hugged her.

When Kilgrave learned that Reva Connors had come into possession of a hard-drive featuring footage of the experiments performed on him as a child, he became obsessed with keeping it a secret. He forced Connors to reveal its location and ordered Jessica Jones to use her enhanced strength to dig it up. Eventually after digging through feet of concrete and leaving her hands dirty and covered in her own blood, Jones discovered the hard drive and handed it to Kilgrave, who did not speak a single word.

Having gained what the evidence of his mother and father's horrific experiments on him and others as children, Kilgrave, Jones and Connors stepped outside to complete his plans. With no further use for her, Kilgrave ordered Jones to execute Connors, which she obeyed by punching her so hard in the chest that she flew several feet and her heart stopped, killing her instantly. While Jones walked over to see if Connors was truly dead, Kilgrave looked on without any emotion for the innocent woman he had had murdered for no reason other than protecting his own identity and secrets.

Wishing to move on with his life, Kilgrave ordered Jones to leave Connors' body behind, but was shocked when he witnessed Jones disobeying him and walking away into New York City. Kilgrave screamed at Jones to come back to him immediately, but she refused, instead walking further away, enraging Kilgrave further. At the same time, a bus driver, drinking on the job, accidentally crashed and rolled his bus, causing Kilgrave to be hit and very nearly killed by the impact. Witnessing this, Jones did not go back to help Kilgrave and instead left him to die in the gutter as she walked away.

Kilgrave lacked any form of moral compass or conscience. Unlike Kingpin or Cottonmouth, who relied on brute force to get what they wanted, Kilgrave embraced a more psychological approach when enforcing his will on others. If someone annoyed him, he would frequently go out of his way to order them to do something vicious to themselves. An example of this was when he ordered a newspaper salesman to throw his hot coffee over his face simply for telling him to stop loitering. This was only a mild example; he had been known to order people to remain motionless for hours on end or even to commit suicide in the most brutal of ways. He also had little, if any, self-control, with a tendency to overreact to even the slightest insult. He repeatedly raped female thralls such as Jessica Jones and was apparently too divorced from human morality to realize it was rape, considering he took them out for fine dining and hotels.

Before he met Jones, Kilgrave was used to getting everything he wanted, essentially a spoiled child in an adult body. However, when Jones managed to escape his influence, Kilgrave became obsessed with Jones; stalking her and trying everything in his power to get at her with the ultimate goal of trying to make her his. To further this goal, Kilgrave attempted to destroy anyone even remotely close to Jones.

However, when forced to see the experiments that created him, Kilgrave showed genuine sadness and discomfort, covering his ears and assuming the fetal position in order to hide from the video being shown. However, he was also shown to have enough strong will to endure ten hours of surgery while awake, using an epidural instead, since putting him unconscious with surgical anesthesia, such as propofol or sufentanil would shut down different bodily functions, removing his control over others.

Ironically, despite being child-like himself, Kilgrave immensely disliked children, believing they should be "seen and not heard, or better still not seen and not heard". One of his most defining traits was his complete refusal to take responsibility for any of his actions, often twisting events and finding reasons to make it sound like others were to blame or that his victims deserved the horrible fate he gave them.

At one point, he went so far as to say Jones didn't love him because she was incapable of loving another person, not even considering the possibility that it was because he turned her into his personal mind-slave. Ultimately, Kilgrave's personality was little more than that of a sociopath.

Mind Control: Kilgrave has the power to control the actions of others through verbal commands, somewhat akin to a powerful hypnotic suggestion. His body produces an airborne virus that makes his victims susceptible to his spoken word, and then they have no choice but to obey his every whim, even to the point where they might commit suicide or kill a loved one. Initially, this control could last for a twelve hour period, although it was later extended to twenty-four. The viral and verbal nature of Kilgrave's power limits its efficacy in circumstances where either the virus or the sound of his voice are blocked or sufficiently diffused. This includes electronic transmission, where audio transducers are typically not able to convey whatever element of his voice carries his power to command. Aside from his own limits, the literal interpretation of his commands can also provide unexpected results when his victims execute his commands in an unexpected way. Surgical anesthesia shuts down the exact part of his brain that creates his powers, instantly ending any control he's currently putting out, and he is still without it for a while after waking up.

Retrieved from "https://marvelcomicsfanon.fandom.com/wiki/Zebediah_Kilgrave_(Earth-1010)?oldid=192468"
Community content is available under CC-BY-SA unless otherwise noted.