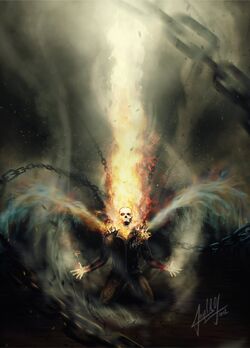 Zarathos was a fallen angel and a mighty, fearless warrior first created by the angel Lucifer Morningstar, gaining some of his traits and personalities, causing for him to rebel against Yahweh, even before his "father" did, and fought the ancient Spirits of Vengeance and corrupted a number of their overseers, the Blood into his "Fallen." Although he promised them increased power, in actuality Zarathos was using their powers to further augment himself.

Failures of a Father

When his father Lucifer has finally decided to lead a massive rebellion of up to one-third of the angelic host whom he deceived in an attempt to take over heaven from Yahweh only to be eventually defeated by his brother Jesus Christ, Zarathos was one of the very few angels who didn't participate in defending the Gates of Heaven from the advancing Legions of Lucifer, preferring to watch from the towers of Mount Zion, located within the holy city, disguised as a citizen, although both Christ and Yahweh were aware of this smart yet cowardly decision of Zarathos not to deal with his father. Upon hearing the banishment of his father out of Heaven into the unknown regions of the cosmos, Zarathos cared so little of him, remarking that a irresponsible and a failure of a father like him even deserved to be tormented in eternal punishment.

Approximately twelve billion years in the past, the non-Celestial cosmic entity and primordial archdemon that resides in a pocket nether dimension named Chthon, secretly and tactically wages a great war with his army of darkness and the Allied Empire of Damnation (consisting of the Hell Lord Mephisto, his ungrateful son Blackheart, the then-current holder of the Satan epithet that was Marduk Kurios, the fallen angel Zadkiel, the mysterious demonic goddess Asteroth, the Cthulhu Mythos, the future Japanese God of Evil Chaos King, a momentarily-possessed Phoenix Force, and Zarathos himself) against the Conservators of the Cosmos, a democratic council of benevolent, god-like beings who had served as the first guardians and peacekeepers of the young universe, in accordance to the legacy left by a noble sector of Celestials, years before their demises.

The war goes on for the next billion years, which covered most of reality in great darkness due to the slow but progressive forces of Chthon, with the latter seemed like it would last for an eternity. Almost two billion years have passed during the reign of terror inflicted by the Allied Empire of Damnation across the primordial stages of the universe, the conflict was finally won and order was restored by the surging forces of good and ideological supporters of peace. In the fall of the Allied Empire of Damnation, most of its members were completely obliterated from existence and died out, while some others barely survived the ordeal by escaping through other dimensions. In Zarathos' case, he abandoned most of his allies to die and made it back through safety, thanks to Mephisto's last second consideration to get him into Mephisto's exclusive realm of Hell as well.

The Mischief of Mephisto

After gaining power, experiences, and worshipers since the Great Billion Years' War, Zarathos was then tempted by Mephisto in his return and challenged him for ownership of his realm. Mephisto tricked Zarathos by letting him release a soulless prisoner named Centurious. Centurious' lack of a soul rendered him immune to many of Zarathos' power. With his followers abandoning him, Zarathos was easily defeated and was sent by Mephisto onto Hell.

In Hell, he was corrupted and was tortured with visions of humanity's depravity until he went insane before manages to finding his way onto the planet Earth, where he later desires to protect the innocent among mankind was forgotten, and replaced with a twisted lust for punishing the guilty. From there on, Zarathos would punish, burn, and devour the soul of anyone who had sinned that he would find, no matter how small the sin or the age of the sinner. His mission to protect the innocent was perverted into a lust to punish the guilty. He became the Spirit of Vengeance himself as a punishment by Mephisto.

Immediately before the process of unbonding, Doctor Strange retold Blaze the full history of Zarathos: he was an angel, the Spirit of Justice, sent on Earth to protect the innocents. Mephisto, however, managed to deceive him and capture him, torturing him for eons, until Zarathos had gone completely mad. His original mission of protecting the innocents, corrupted by Hell, became a dark obsession of punishing the guilty, and he became fallen angel the Spirit of Vengeance.

After a while when Johnny finally defeats Blackheart (who was now gaining control over Zarathos' imprisonment on Hell and Earth after his father, Mephisto abandoned his realm of Hell), Zarathos was freed from Hell's corruption and has returned to his true, angelic form.

He was reformed and was accepted by Yahweh to be his servant once again, returning Zarathos' form in the used he was before, an angel of God and eventually became a member of the Spirits of Vengeance and worked alongside his fellow angels, while he was still being allowed by Johnny to possess him as a host to remain becoming the Ghost Rider, still punishing the corrupted souls who are deserved to be punished, including his own father who is now known as "The Devil."

During the events on the Battle of Armageddon, Zarathos became one of the individuals who were the members of the Spirits of Vengeance to help the defending of the gates of Heaven from being infiltrated by his father's army of more than a number of centillion legions. All of those legions were eventually defeated and was vanquished leaving Lucifer to his last stand.

Due to Zarathos hatred for his own father, Johnny Blaze let him control as the Ghost Rider one more time, and they battled each other once again, but was still outmatched in the end by his father and creator. Lucifer then unleashed his innermost true power of a Hell-Lord, and rapidly attacks Zarathos annihilating him in battle. While the angels and the Spirits of Vengeance charges towards Lucifer to help Zarathos in defeating the Devil, but due to Lucifer's most powerful state, they were all defeated and some were disintegrated, killing them in the process.

The remaining angels who were severely injured by the Devil had no choice but to watch as Lucifer is a about to strike his final killing blow to his son, until the last beam of light shoots through the battleground, aiming straightly towards the Devil. The individual who attacked Lucifer was revealed to be Jesus Christ Himself, and singled-handedly outmatches Lucifer with His true powers, before finally vanquishing him from the battleground of Armageddon, transporting him in his own realm of Hell. After revealing his father's demise, Zarathos showed no remorse saying that he truly deserved to slowly burned in his own Hell, before all of the Spirits were returned to their original timelines in the mortal world, were they belong to, protecting Earth from demonic threats once again.

Demonic/Angelic Physiology: Zarathos was a former demon and a reformed angel of uncertain classification who possessed a number of superhuman attributes, to what extent all of his abilities reach are unknown but it is said that he rivals the demon lord Mephisto in terms of raw power:

Retrieved from "https://marvelcomicsfanon.fandom.com/wiki/Zarathos_(Earth-61615)?oldid=266488"
Community content is available under CC-BY-SA unless otherwise noted.