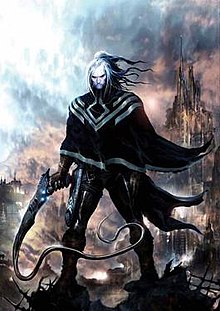 Earth-101
Base Of Operations
His Ship
Characteristics
Gender

The Kree are fascists. They kill for supremacy. I kill for money.

Zak-Del was once a dedicated Kree soldier serving in the Kree-Skrull War. However, he came to realize that his devotion to the Kree was purely because he had been raised that way. He began to ask himself what it was he wanted, which led to him abandoning the military and becoming an inter-galactic bounty hunter so that he could use his skills for profit.

His line of work eventually led him into conflict with both Captain Marvel and the Guardians of the Galaxy. He came to develop a disdain for them, and eventually accepted a job working for Thanos and the Black Order.

Retrieved from "https://marvelcomicsfanon.fandom.com/wiki/Zak-Del_(Earth-101)?oldid=248273"
Community content is available under CC-BY-SA unless otherwise noted.