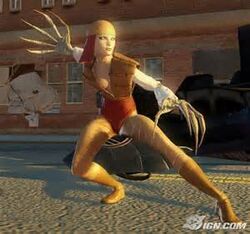 Little is known about Lady Deathstrike's life prior to the Superhero Civil War. It can be assumed to be similar to her mainstream counterpart.

Lady Deathstrike was among the sueprvillains placed under S.H.I.E.L.D.'s nanite network in order to aid them in the Sueprhero Civil War. She and Venom were deployed during the White Star's attack on a S.H.I.E.L.D. transport carrying unregistered heroes going through Hell's Kitchen. While Venom assissted Delta Squad, Deathstrike attacked Liberty Team only to be brought down by the Thing. She later turned with Venom again during S.H.I.E.L.D.'s trap at the Green-Meyers chemical plant along with Bullseye and the Green Goblin. The quartet eventually became the first Thunderbolts to be brought under full nanite control once the network gained sentience, and planetd explosives that destroyed the plant. Later the entire nanite-controlled portion of the team attacked the heroes during the Anti-Reg force's attack on Prison 42, in which Deathstrike was knocked out by Captain America while attempting to kill Iron Man.

After the Fold's defeat, Lady Deathstrike one of the villains scarred by the events months ago to the point of suicide.

Lady Deathstrike is a supremely skilled martial artist, considered an expert in the art of Kenjutsu and other samurai warrior skills. She is an accomplished pilot of various aircraft and seacraft, and is fluent in both Japanese and English.

Retrieved from "https://marvelcomicsfanon.fandom.com/wiki/Yuriko_Oyama_(Earth-6109.2)?oldid=154723"
Community content is available under CC-BY-SA unless otherwise noted.