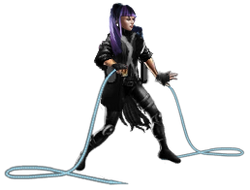 Surge is a mutant. Electrokinesis

Surge is a native Japanese speaker who speaks English fluently, with little trace of an accent. She has an aptitude for leadership and has had some training from Wolverine in hand-to-hand combat.

Possesses the strength of a normal girl her age, height, and build who engages in moderate regular exercise.

If Yukio doesn't discharge the electricity that builds in her body and mind, her mind starts to race, making her speak very fast in a jittery, electronic fashion. This worsens her control over her discharges and radically alters the electrical impulses in her nervous system.

Equipment: X-Men Blackbird, her own speed
Transportation: None known.
Weapons: None known.

Retrieved from "https://marvelcomicsfanon.fandom.com/wiki/Yukio_Ashida_(Earth-1010)?oldid=218557"
Community content is available under CC-BY-SA unless otherwise noted.