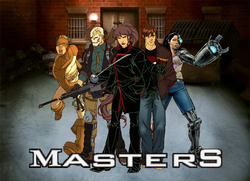 Originally assembled by Coat of Arms as an examination of super heroism art project. The group was largely motivated by Melter's desire to be real heroes, but hindered significantly by unclear and conflicting ideals including Executioner's Punisher-style ruthlessness and Coat of Arm's distorted view of ethics. Only Melter showed much interest in actual altruistic heroism.

The team began calling themselves the "Young Avengers", but were only active as superhero a short time before being confronted by the real Young Avengers. The original Young Avengers offered the possibility of recruitment but after individually vetting each member they rejected them.

Unhappy with the Young Avengers decision, the team decided to take on the mantle and expectations of the Young Masters, and Executioner contacted Dell Rusk to gain his support and the backing of his Avengers. When the Young Avengers returned to the Invisible Manor, they were unexpectedly confronted by the Dark Avengers.

Retrieved from "https://marvelcomicsfanon.fandom.com/wiki/Young_Masters_(Earth-1010)?oldid=155547"
Community content is available under CC-BY-SA unless otherwise noted.