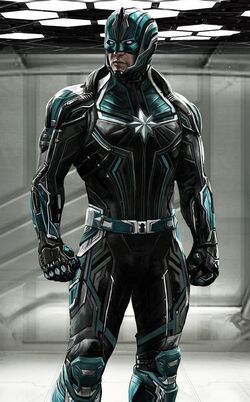 Yon-Rogg was an overtly strict and loyal major and former colonel and captain of the Kree Empire. Aside from his militaristic title and reputation, he was also known in the intergalactic communities as one of the last members of the oldest known Kree families, the House of Rogg, with his now deceased ancestor Gen-Rogg being one of the leaders of the Kree Empire in its earliest generations, to which the latter was also one of the intellectual compositions that was replicated onto the Supreme Intelligence, the secret organic artificial intelligence ruler of the Kree Empire for hundreds of millennia, after her death. Appearing and acting as Gen-Rogg in most of their virtual meetings and times of mentoring, it became one of the main factors that led to Yon-Rogg into molding his long-time loyalty to the Supreme Intelligence over time, just as he was loyal to the Kree Empire itself and its ruthless conquest ideologies. Later on, he was also known as the commander of the Helion, a Kree starship that was sent to Earth on a mission by the Supreme Intelligence during the late 1980s. Yon-Rogg felt a deep hatred for the noble and idealistic Kree naval captain (also a later major) Mar-Vell, and actively tried to get him killed on their mission to Earth at the time. Also, he was deeply jealous of the relationship between Mar-Vell and the passionate medic Una, who was also Yon-Rogg's one-sided love interest.

At one point during his mission, Mar-Vell were given orders to infiltrate the planet Earth by Yon-Rogg without much questions, who was still jealous of both Mar-Vell’s reputation as a warrior and his relationship with the spacecraft’s then-current medic, Una. One day while Mar-Vell was returning to the ship to renew his supply of breathing potions, Yon-Rogg tried to assassinate him by “accidentally” firing the ship’s laser beams towards him. However, a small private plane came between the beams and Mar-Vell, and it was destroyed instead, while it was still flying in their paths.

Meanwhile at the orbit of Earth's outer space, Yon-Rogg would continue trying to assassinate Mar-Vell after his survival in successfully entering the planet, and as a result, he activated a dormant Kree Sentry from his spacecraft through an escape pod, in the hope of that it would kill him once it lands and finds Mar-Vell on the Earth's surface. While at it, Yon-Rogg remained patient and still waited for the assassination of his most hated subordinate, to be successful, before returning to his homeworld to lie to the superiors, and will be informing that Mar-Vell "didn't make it," during the mission.

Mar-Vell's lover, Una, was unfortunately unaware of all the events going on. The only knowledge she had known, is that Yon-Rogg told her that Mar-Vell's own spaceship had crashed on to Earth, and are doing their very best to find him. Despite what Yon-Rogg said, Una still had some doubts that Yon-Rogg was actually telling her the truth, believing that Yon-Rogg had all of this as a part of his sinister scheme. Unfortunately, unbeknownst to Mar-Vell at the time, Yon-Rogg had murdered Una after finding out about the true whereabouts of her lover after forming a resistance organization against both the Kree Empire and the Skrull Empire, all for the sake of keeping his dirty little secret hidden among the rest of the Kree Imperial Navy, although he still trusted the Supreme Intelligence into keeping his diabolical deeds, as he would later return to Hala, the Kree capital and home planet.

Mar-Vell confronted Yon-Rogg after the latter had mostly been observing a few moments of his whereabouts from the Earth's orbit, who had abducted Carol Danvers as a hostage to use against him. Mar-Vell defeated Yon-Rogg, who apparently perished (at that moment) when a nearby powerful Kree engine device that was the Kree Psyche-Magnitron has exploded. But in the course of this fight, Danvers was bombarded with radiation from the Kree Psyche-Magnitron, which caused her to develop a half-Kree physiology that was similar to Mar-Vell and Yon-Rogg's own; and with Danvers using the super-human powers she had accidentally acquired by this means, Danvers later became the first costumed adventurer and cosmic heroine known as Ms. Marvel. Yon-Rogg was later revealed to have survived and has made it back to Hala, though much to his surprise of regret and disappointment later on, he realized that his mistakes on that duel against Mar-Vell had actually created someone so powerful who would eventually become one of the strongest and most powerful beings in the universe, even stronger than what Yon-Rogg could and would possibly be, and that was none other than the noble Carol Danvers, an eventual successor to Mar-Vell in the mantle of Captain Marvel.

On his way back to his home planet Hala, the home of the Kree Empire, the return of his old archenemy Mar-Vell was accompanied by Yon-Rogg and the rest of his lower subordinates inside the spacecraft, whom he had under cryogenic hibernation, while wearing power-dampening cuffs and other restrains, just in case he and his comrades might accidentally escape. As he returned to Kree-Lar, he had receive a extremely warm welcome by his people as the heroic survivor during their intergalactic expedition, and with it, his superiors in the Kree Void Science Navy honored him for sparing the lives of his former subordinates, most especially Yon-Rogg whom he deeply hated for being responsible towards the death of Una, whom the latter had turned into resistance fighters to end the war between the Kree Empire and the Skrull Empire. Because of his selflessly heroic and outstanding actions, he was given the medal of honor by the Imperial Navy, much to Yon-Rogg's slight jealousy but was grimly contented after knowing Mar-Vell's first hand reaction after learning upon the death of Una and his other former allies turned enemies of the Kree Empire.

Kree Mutate Physiology: Yon-Rogg possesses the natural attributes of the Kree race, including resistance to poison, toxins, and disease, as well as a higher natural strength level and more durable body than a human. Though less powerful than Carol Danvers and Mar-Vell's universally-scaled cosmic powers, Yon-Rogg can also fire powerful concussive blasts of photon and stellar light energy from his hands and fingertips, along with his far more significant power to manipulate the gravity within his surroundings as he often uses it to his own advantage during battles against his rivals and adversaries.

Retrieved from "https://marvelcomicsfanon.fandom.com/wiki/Yon-Rogg_(Earth-61615)?oldid=231840"
Community content is available under CC-BY-SA unless otherwise noted.