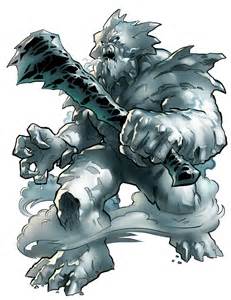 Frost Giants; formerly ally of the Masters of Evil
Relatives
All the Frost Giants and Ice Giants
Universe

Little is known about Ymir's life before his association with the Masters of Evil. It can be assumed to be similar to his mainstream counterpart.

Ymir the Ice Giant apparently took part in the battle between Odin and Victor von Doom, as he mentioned it when he came face to face with the Ultimate Alliance. He seemed invincible except for the fact that only the spears from his own minions could damage him. His minions continued to attack even though Ymir himself was defeated. It could be possible that Ymir gave Dr. Doom control of the Frost Giants.

Ymir is vulnerable to extreme high temperature. It would caused him to melt down.

Equipment: None known.
Transportation: Extra-dimensional teleportation, usually under his own power.
Weapons: Ymir carries an enormous, ice-covered club, which he uses as a weapon. Possibly the club is entirely composed of ice.

Retrieved from "https://marvelcomicsfanon.fandom.com/wiki/Ymir_(Earth-6109.2)?oldid=128961"
Community content is available under CC-BY-SA unless otherwise noted.