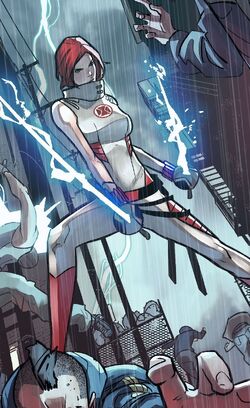 Earth-4123
Base Of Operations
Safehouse in Detroit
Characteristics
Gender

The Black Widow is so called because she leaves no trace of her presence behind. Me? I leave a trail of blood.

Yelena Belova was abducted from her loving parents after they were assassinated by the Winter Soldier, when she was only 6-years-old. From there, she was taken to the Red Room, a secret training program founded by higher-ups in the Kremlin, as well as Hydra and the Hand.

As she grew older and mastered herself as a killing machine, she found herself growing close with her fellow Black Widow trainee, Natalia Romanova. Although the Red Room had forbade the Widows from forming attachments to each other, Yelena and Natalia formed an unbreakable bond anyway.

Fueled by their newfound love and compassion for each other, the two of them mounted an escape from the Red Room, and went on to become Bounty Hunters in order to get by. However, eventually the past caught up with them in the form of the Winter Soldier himself, who assassinated Natalia, who bled out in Yelena's arms.

Barely able to escape with her life, Yelena adopted the moniker of the Red Widow, which she fashioned to be a mockery of the Black Widow Program, as well as a foreshadowing for what was to come to it.

Just before she was able to truly set out on her path towards revenge, however, she was plucked from her reality by the Silver Sentry, and placed onto the new Team X. Reluctant to play along with his games, but seeing no other option, the Red Widow agreed to join out of hopes that she would one day get to return and exact her vengeance.

Following the death of their leader, Captain America, the new Team began to look into the truth about the Nexus, and discovered the original Team X in stasis. Under Mirage's leadership, they freed them and launched an assault on the Silver Sentry.

Although Mockingbird died in the effort, they were successful, and gained control of the Nexus. When faced with the option of continuing on with Team X or returning home, Yelena opted to take care of her unfinished business back in her own reality, feeling her life wouldn't be complete until she avenged Natalia. The others respected her decision, and dropped her right back where she was; about to topple the Red Room and kill the Winter Soldier.

Retrieved from "https://marvelcomicsfanon.fandom.com/wiki/Yelena_Belova_(Earth-4123)?oldid=262531"
Community content is available under CC-BY-SA unless otherwise noted.