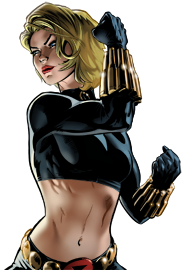 Single
Occupation
Intelligence agent
Origin
Origin
Trained by the Red Room and the only person in the world to equal or better Natasha Romanoff's scores.
Place of Birth
Kiev (presumed), Ukraine
First appearance
The Call

When the United States and Russian governments sent Natasha Romanoff after the Deathless Frenzy, Yuri Stalyenko sent Yelena, at her own insistence, to shadow Natasha to ensure that the serum ended up in Russian hands. After being fooled into thinking Natasha was dead, Yelena headed to Rhapastan to stop General Khan and the Deathless Frenzy. She failed and was captured. It was only through the efforts of Natasha Romanova that Khan's plans failed, although Yelena learned some important lessons from her failing.

Shortly after, Yelena was used by Natasha in her plans to find out what General Stalyenko was up to. Yelena was captured from her home by S.H.I.E.L.D. agents. Natasha, Fury, and a reluctant Daredevil had her face surgically swapped with Natasha's. Wandering New York in shock Yelena nearly lost her mind. After the whole affair was over Natasha revealed that she had done this to try and help Yelena see that spies were not heroes, but tools who get used for nasty business. Yelena felt violated and decided to aid Dell Rusk's Dark Avengers as the Dark Widow.

The Dark Widow possesses the normal human strength of a woman of her age, height, and build who engages in intensive regular exercise.

Retrieved from "https://marvelcomicsfanon.fandom.com/wiki/Yelena_Belova_(Earth-1010)?oldid=150216"
Community content is available under CC-BY-SA unless otherwise noted.