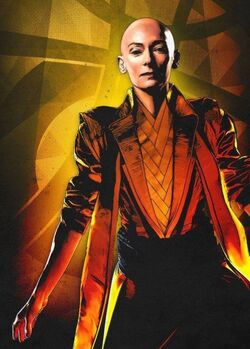 Tell me, Doctor Strange... Have you seen all of that in a bookshop?

Yao was once an apprentice doctor born at some point in the 14th century, in the mystic city of Kamar-Taj, a village in the Himalayas area now known as Tibet. Originally, the youth was a peaceful apprentice doctor and sometimes a farmer, like her fellow villagers, but encountered an elder villager named Kaluu, whom Yao had considered to be her father-like figure she she was young. Kaluu then shared with the youth his knowledge of magic, and they began exploring the secrets of sorcery together, even learning the secrets of immortality. The youth decided to seek out an order of ancient magic users known as the Masters of the Mystic Arts in order to devote his entire life to their goal of combating evil sorcerers. The youth eventually became even more skilled than his colleagues, and grew in power so great that she was the first Earth mortal to meet with such cosmic entities and embodiments, most notably Eternity, the sentient embodiment of the universe, who presented her with the Eye of Agamotto and charged her to become one of the Earth dimension's first known Sorcerers Supreme. On the course of the next thousands of years, Yao remained in this capacity, outliving almost all other members of her order, thanks to the arcane wisdom Kaluu gave to her about the secrets of the Dark Dimension, in order to regain immortality and at the same time achieve it without having herself fall under the influence of its cosmic ruler, Dormammu.

An older Yao, who was now more often known by her legendary pseudonym that was the Ancient One, becomes the latest in a long line of Sorcerers Supreme who had defended Earth from mystical threats for the next millennia. She was the Sorcerer Supreme of her prime as well as the long-time leader of the Masters of the Mystic Arts in the modern era reincarnation of the organization of sorcerers. For centuries, the Ancient One willingly continues to protect Earth from mystical threats, and dedicated herself to helping others in need by educating them in the magical arts to give them new hope and purpose in a life they'd originally believe was apparently over. As a sorcerer and mentor, Yao gave second chances in life to such individuals, such as the lost pilgrim Karl Mordo, who would later become her most loyal and faithful student, despite his lack of awareness at the time to how much of a hypocrite she was to most of her core teachings as the overpraised and idolized Sorcerer Supreme.

However, later on, Yao would face the greatest challenge in the form of her former student, Kaecilius, who had became completely delusional as he was corrupted by the so-called "promises" that the Dark Dimension could offer and sought to bring the diabolical entity Dormammu to Earth. In the midst of her war against Kaecilius and his Zealots, the Ancient One encountered the once desperate and once narcissistic Doctor Stephen Strange, to which in spite her initial reluctance, was persuaded to accept him as her student by the faithful and loyal Karl Mordo. During one final battle, the Ancient One was fatally wounded and despite the best efforts of Strange and Metro-General Hospital's passionate ward Christine Palmer, she accepted her fate on that day and finally died peacefully, but not before giving Doctor Strange the advice he needed to defeat Dormammu as well as to find his new purpose in life as a master of the mystic arts, officiating that she was grateful to pass on the mantle of Sorcerer Supreme to Strange himself, whom she sincerely believed and considered to be the best among the sorcerers she has encountered for the past millennia.

Only hours after the death of the Ancient One, Mordo and Strange was motivated by the Sorcerer Supreme's advice, to which they regroup and battle the Zealots in Hong Kong, where Strange encounters Dormammu within the Dark Dimension. Though Strange manages to thwart Dormammu's plot by using the Eye of Agamotto in order to create a time loop, Mordo is once again furious over this, viewing it as another perversion of natural law. Though the threat has finally been defeated, a disillusioned Mordo turns his back on his allies, noting that the bill would come due for them all, as it always did. As of that moment, Mordo turned away and left for parts unknown, to which it was revealed that Mordo became a hunter for other rogue sorcerers that Yao has helped since, despite the fact that Mordo was now, also a rogue sorcerer himself. Even Yao's astral spirit would remain active from the astral plane, mainly with Strange and other mystic sorcerers to import wisdom and help them on their future journeys to protect the Earth from new mystical dangers that they may or may have not encountered before.

Sorcerer Supreme of the Mystic Arts: As a Sorcerer Supreme of the Earth, the Ancient One possessed a greater knowledge and mastery of the mystic arts than anyone else on Earth. She was born with a great talent for sorcery, and she has fulfilled that potential through extremely long years of study and training, living for more than 500 years. The Ancient One has the ability to tap this universe's infinite store of ambient magical energy and manipulate this to a variety of effects. The skill derives from three major sources: personal powers of the mind/soul/body, powers gained by tapping the universe's ambient magical energy and employing it for specific effects, and, finally, powers gained through the tapping of extra-dimensional energy by invoking entities or objects of power existing in tangential mystical dimensions. (The latter means of power is usually gained by reciting incantations.) Some of these effects include:

Retrieved from "https://marvelcomicsfanon.fandom.com/wiki/Yao_(Earth-61615)?oldid=235975"
Community content is available under CC-BY-SA unless otherwise noted.