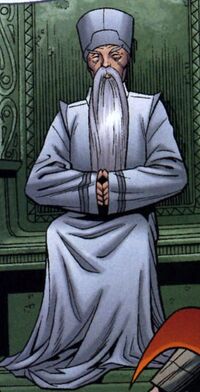 Do you think there is anything Doctor Strange knows that I do not? The answer is no. Because everything he knows, I taught him.

The Ancient One was a master of the mystic arts. He was so skilled, in fact, that he held the tile of Earth's Sorcerer Supreme.

Stephen Strange approached Yao and asked him to repair his hand, which were broken in a car accident. He initially refused; however, he was inspired by his determination and decided to train him as his apprentice. Strange eventually left Kamar-Taj and used the Ancient One's teaching to become the heroic Doctor Strange.

Retrieved from "https://marvelcomicsfanon.fandom.com/wiki/Yao_(Earth-2228)?oldid=192140"
Community content is available under CC-BY-SA unless otherwise noted.