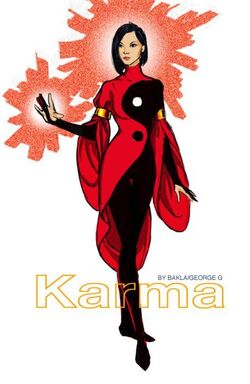 Homo Superior Physiology: Shan is an adapt Homo Superior specimen whom has undergone considerable bio-mechanical alterations due to incorporating various engineering practices into her own anatomy. Using the highly advanced technologies presented to her by the Neo Exiles, coupled with vast resources provided by the Hatchi Corporation of her Earth. She has undergone numerous modifications to her genetics and surgical indoctrination of personal enhancement. Her powers have been further bolstered by the absorption of her malefic twin brother Tran into her biophysical matrix.

Secondary Mutation: Having undergone such profound cultivation of self throughout her experiences as a hero, manufacturing tycoon, dimensional explorer, political figure, disciplinary study authority and the like. Shan's experience's have bestowed her with a powerful new ability as a result of internal personal growth and considerable remuneration on her part.

BiomTekka Active Plasma: Axiom's prosthetic leg incorporates the latest in cutting edge design pertaining to the Hatchi Corporation's nanotechnology cut with the next-gen organite biotech hailing from the mutant home nation of Krakoa. Along with a host of other micro-mechanical innovations gathered from across her travels through time & space, the mechanical extremity has the added effect of flushing out Xi'an's baseline hemoglobin with a semi-sentient polyalloy fluid teeming with several trillion micro-robotic supercomputers. Each one a living, thinking storage space of nearly infinite memory with which to store and withhold endless bits of acquired knowledge as streamlined fluid data she can transfer to and from herself across an infinite number of means. The micro machines coursing in her veins function similarly to the various symbiote-esque designs built by other prominent geniuses; like Tony Stark's endo-sym based power armor derived from extremis. Either using this feature to coat herself in a density and tensility altering nanomolecular fluid bearing the pliancy of a klyntar to build and re-form around her body to produce micro-mechanical constructions or a protective outer casing which lets her alternate her physical semblance and ramps up her physical resilience to injury. More creatively, shan can repurpose her mictro-tech to spread and infect and give other organic/non-sapient objects properties similar to her own while puppeteering their actions through a cybernetic variation of her hive mind abilities. Creating an instant subservient army of unkillable cyborg soldiers at will.

Equipment:
Orgamech Prosthetic Leg: In a harsh battle with Nimrod series sentinels, Karma ended up losing a leg while battling on the front lines. She would eventually get a replacement prosthesis to compensate for her hobbled state. Over the coarse of time Axiom would repeatedly modify the bionic stand-in chassis with technology harvested from differing era's and alternate dimensions. Even integrating her own companies highly advanced nanotech designs, in her travels across dimensions, Shan even amalgamated the advanced Nubotech of Krakoa into her legs schematic. Creating a transgenial blend of microtechnologies both natural and artificial to create something entirely new.

Stealth Cyber Gear: On her jaunt through the timestream to the alternate future of 2099, Shan managed to procure one of the most innovative technological designs of the 99th century. A remote control cyberpathic interfacing apparatus which lets a user interact with most any and all technological and digital mechanization via wireless up-link. Shan managed upgrade the technology and place it as a piece of jewelry (an earring in her case) which any individual can use and wear as a fashion accessory, as well as mentally dive into whatever cybernetic system one focuses on in order to gain access to it, to assume operative control and fix most any appliance she can connect with using only the power of ones mind. Thus giving its wearer pseudo-technopathic abilities. Another augmentation the device offers its host is the ability to broaden ones awareness of surroundings, easily allowing Shan to discern functional reality from a convincing hard-light holographic projection as advanced as a Cerebro danger room fabrication. It can even copy and assimilate the technology of other pieces of advanced systematization no matter what world, era or even reality it is from. Karma often making use of her cyber gear to modify the technology in her own physique with all new assimilee's from across the infinite dimensions which she's traveled.

Yellow Eye Bugs: Harvested from the facilities of Mojoworld; Xi'an made use of bio-mechanical insectoid spy drones implemented by said realities demented talk show promoter Mojo. The robo bugs act as nigh-omnipresential spy drones which are physically, mentally and extra sensorial imperceptibility to prying eyes and ears; people wont even pay them any mind while they are buzzing about in their faces most of the time. Whenever someone or something of interest pops up on her radar, Xi'an can dispatch a new one of these observatory idler's to the desired target in a heartbeat as they have 'planet dissociative travel' capabilities to get them to and from an object of study near instantly. While virtually undetectable themselves, these floating eyes can easily see and track anyone and everyone even through any form of scanning or homing evasion. Such as the likes of ForgetMeNot's existential superposition that writes him out of the story purview of most anyone else's depth perception. But this requires some sort of disruption in the quantum flux that renders the individual both real and unreal at the same time in any causal plane of apprehension. To an infinitely more deadly degree Xi'an can use the parasitic T.O nature of these mechanicloid arthropods to convey a slew of her more infectious abilities into unsuspecting targets without them ever realizing it until it is too late. Other uses to such deployment is the implementation of potent psychoactive viruses of her own devising, taking notes from the Apocalypse augmented physiology of Caliban; Xi'an can afflict people with a host of mental converted diseases which she uses both productively and hazardously; either conveying psychoreactive sicknesses that gradually deteriorate both the mind and body until the subject veritably decomposes into a cytoplasmic slop puddle, distribute bioaugmentative modification T.O. virulent's such as the likes of Extremis to modify select proponents of a specified race. Even simply using the eye-spies in order to convey her hypnotic voice/psychosomatic chemistry in order to remotely influence thought process and personal perception of a multitude of sapient minds.

Retrieved from "https://marvelcomicsfanon.fandom.com/wiki/Xi%27an_Coy_Manh_(Earth-386)?oldid=279376"
Community content is available under CC-BY-SA unless otherwise noted.