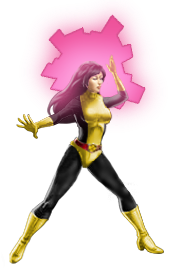 Xi'an Coy Manh is the daughter of a colonel in the Vietnamese army. Xi'an and her twin brother, Tran Coy Manh, were mutants, with the power to take mental possession of the minds of others. While still a child, Xi'an saw an enemy soldier threaten Tran. Not realizing she had a superhuman power, Xi'an nevertheless, acting on impulsive, took possession of the soldier's mind and stopped him from killing Tran. Tran then successfully attempted the same feat and forced the soldier to kill himself. While Tran took great delight in this use of his new-found power, Xi'an was frightened of her ability. Xi'an kept their powers secret, but Tran told their uncle, Nguyen Ngoc Coy, a general in the Vietnamese army.

General Coy later arranged for Xi'an's family to leave Vietnam, which was now entirely under a Communist government, but only Tran was sent abroad. Eventually, the rest of the family left Vietnam on a small, crowded boat. Xi'an's father was murdered by attacking pirates, who assaulted the women, and her mother died the day the survivors were rescued, by the United States Navy. Xi'an, her younger brother, Leong Coy Manh, and her younger sister, Nga Coy Manh, were sent to the United States to be reunited with her Uncle Nguyen and Tran. General Coy had become a powerful and prosperous criminal in the United States (although he was publicly known as a businessman), and Tran was using his powers in his uncle's employ. When Coy asked Xi'an to use her powers in his service, she refused. Xi'an sought help from a Catholic priest, Father Michael Bowen, whom she had known in Vietnam. With Father Bowen's aid, Xi'an secured employment and an apartment and enrolled her younger siblings in school.

At that time, General Coy kidnapped Leong and Nga, in an effort to blackmail Xi'an into working for him. Desperate, Xi'an located Spider-Man, whom she believed to be a criminal from accounts in the New York Daily Bugle, and took possession of his mind, so she could use his powers to rescue the children. While possessed by Xi'an, Spider-Man fought three members of the Fantastic Four, who were present at a party Coy was hosting, unaware that he was a criminal. Xi'an was forced to release Spider-Man's mind without having freed the children, but Spider-Man and the Fantastic Four located Xi'an and Bowen, learned her story, and agreed to help her. Tran used his powers to take control of the Fantastic Four and have them attack Spider-Man. To save Spider-Man, whom she now knew was no criminal, Xi'an was forced to kill her brother, by absorbing his life essence into herself. Xi'an was then reunited with Leong and Nga.

Shortly thereafter, Xi'an, who now called herself Karma when using her powers, was recommended by Reed Richards and accepted the invitation of Professor Charles Xavier to enroll in his school, in order to learn to use her mutant powers better.

Xi'an is a mutant with telepathic and psionic based powers dealing in possession, mind scanning and limited telepathy. Her Powers include:

Karma possesses the normal human strength of a woman of her age, height, and build who engages in moderate regular exercise.

Subordinate Personality: If she remains in possession of a host for too long she will begin to think and act as her host would, and eventually her own personality would become subordinate to one identical to the host's.

Retrieved from "https://marvelcomicsfanon.fandom.com/wiki/Xi%27an_Coy_Manh_(Earth-1010)?oldid=185558"
Community content is available under CC-BY-SA unless otherwise noted.