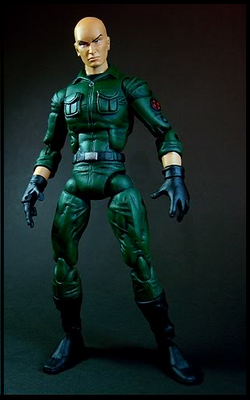 I've carried so many names in my life, but only one has remained the constant. My name is Xavier, and I am a mutant. Don't fear, for I am what you also are, the next step of human evolution, or as you might put it...the future.

Xavier's origins go all the way back to the early years of humankind. Millions of years ago, when man was starting to rule the Earth, an alien visitor arrived to the planet to observe and study its nascent species, that being was named Uatu, an extraterrestrial celestial scout from a far point of the universe who observes and studies all the interplanetary species. However, during his work, he became fascinated with a female Earther named Maya, who couldn't speak beyond grunts and moans, being a very primitive planet, but Uatu's powers helped her to understand his language and a bond had formed, but after the small time they share, his responsibilities as Watcher came first. That was until he was discovered to have violated the main rule of the Watcher: Never interfere with the course of Evolution. As a punishment, Uatu was exiled from Earth as his responsibility and denied any kind of contact. Unbeknownst to him, Maya got pregnant from their encounter and nine months later, she gave birth to a child who she just called "X".

Due to "X"'s mixture of genes both human and celestial, made him a unique being who easily adapted within his human environment but understood and evolved his being far greater than the ordinary human, which also made him easier to understand the languages he was hearing, in a more advanced way.

It was during a major meeting between "Elder" men that X's first power emerged, by listening to his leaders' thoughts as if they were speaking out loud. Being overwhelmed by the large amount of voices in his head, Xavier fainted, but it was during his sleep that he committed himself to train his powers. As the years passed by, X took full control of his powers, going so far as to use them for his personal benefit, especially when it comes to charm women and procreate. After his first experience, he decided to baptize himself as a new man, expanding his simple letter name to "Xavier".

As the centuries passed by, Xavier remained the same young man, slowly aging thanks to his mutant gene, making 50 years pass as a single year in his life. This allowed him to become an active witness of human evolution throughout the years, adapting to each different age, adding a name to his Xavier surname, going through names like "Nathaniel Xavier", "Gerald Xavier", "James Xavier" and so go on. He also kept his charming personality with the women, procreating and reproducing his offspring, but abandoning his duties as a father to move on.

Once the world hits the end of the 20th Century, now going by the name of Charles Xavier, he suddenly felt the urge of reaching the lost corners of his own mind, not just manipulating the thought, but also the physical world. Through sheer force of will, Xavier trained his mind to reach his telekinetic abilities, controlling the room around him. But once he developed this power, he unknowingly unleashed his last power. His telepathy not only allowed him to listen to their minds, but he suddenly sensed different kind of auras, all of them similar to his, making him realize that he's no longer the only mutant on the world.

Leader of a Species

After a self-imposed exile in Westchester to meditate on this revelation, he realized that his "casanova" attitude led him to actually reproduce mutant children, who were reproducing throughout the ages and expanding the mutant gene on the world, now a full pledged species. Xavier felt that he neglected this for too long, and now he must embark on a responsibility to shepherd his "Children" and make amends for the neglecting of the past, focusing on building a future for both mutant and humankind. His first step is choosing a group of men and women to become his students, as well as the first defenders of the mutant people.

Telepathy: Able to read minds and project his own thoughts into the minds of others within a radius of 250 miles.

Advanced Life-Span: Xavier has lived for millions of years, and still remains in the prime of his physical condition.

Retrieved from "https://marvelcomicsfanon.fandom.com/wiki/Xavier_(Earth-120986)?oldid=134561"
Community content is available under CC-BY-SA unless otherwise noted.