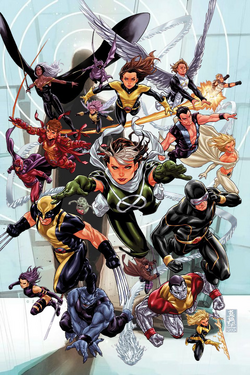 Professor Charles Xavier was the leader of the X-Men, a group of heroic mutants who were trying to seek peace with the human race, educate young mutants in the responsible use of their powers, and stop mutant savage and vicious terrorists, such as Magneto and his Brotherhood from starting a war with humanity. The team is currently being based at a Xavier's School for Gifted Youngsters, run from Xavier's Westchester mansion, which is often called by its visitors and residents as the X-Mansion. The base included subterranean medical labs, a training facility called the "Danger Room," an aircraft hanger containing a series of specialized aircraft, which included their main greatest source of transportation known as the Blackbird, and the Cerebro as their mutant detector.

Prior to its wonderful formation, Professor Charles Xavier and his associate and long-time friend, Raven Darkholme, were contacted by agents of the CIA to help investigate the Hellfire Club, a clandestine organisation of mutants with suspected criminal operations. The association with the CIA soon brought Xavier into contact with other mutants, including Erik Lensherr, Beast, Banshee, Mastodon, Archangel, and Raven as they would eventually name their task force mutant team as the X-Division.

Xavier's mutant group then came into conflict with the notorious Hellfire Club, which led to the murder of a few members at the hand of the Hellfire Club's leader, Sebastian Shaw. Xavier resolved to stop the Hellfire Club and began to train his young group in preparation for conflicts to come. During the skirmish against with the Hellfire Club, Erik and Charles' views regarding the path of the emerging mutant race diverged, resulting in the end of their friendship and the fracturing of their already emerging team. Erik, now going by the name "Magneto", left to form his own Brotherhood of Mutants, with Darkholme following him, while Xavier continued to shape the others into a team with a higher purpose, the X-Men.

The Brotherhood of Mutants

Increasingly convinced humanity would not peacefully relinquish the planet to Homo Superior, Erik became more radical and cynical. Realizing that Xavier didn't agree with his views, a paranoid Magneto took to wearing the helmet previously owned by Sebastian Shaw to prevent the psi intrusion into his mind. Having no other choice but to face Erik in person, Xavier decides to confront Erik alone and finally manages to convince and fled with a handful of followers to abandon Erik's Brotherhood, but Magneto decided to teach him and the other followers a lesson and broke his spine, leaving him permanently crippled. Due to Magneto's brutal and merciless action towards Charles, the X-Men's hatred towards the Brotherhood has only grown even worse, causing for the Brotherhood of Mutants to become one of the most, if, not, the most dangerous, infamous, and ruthless foes since they've faced off the Hellfire Club.

After the defeat of Trask and the Sentinels, the Brotherhood and the X-Men remained arch-enemies again, as usual. It was later revealed that most of the unused Sentinels were stolen and reprogrammed by Magneto and the Brotherhood and was used as the loyal guardians of the gates of his citadel, at the island of Genosha.

After reawakening from his deep sleep, Apocalypse reassembled his new Horsemen, comprising his new recruits, Storm, Psylocke, Archangel, and finally Magneto. Due to his abandonment to his own Brotherhood, the team disbands and separated their ways after their leader left the mutant supremacy. Some did remain loyal to the Brotherhood but with no one to lead them, the Brotherhood is still powerless without Magneto's guidance and leadership.

Charles Xavier discovered what happened and tries to reach Erik, but it was to late. Magneto leaves with Apocalypse and attempts to destroy the world, along with his goal to obtain Professor X's telepathic abilities by transferring his consciousness into his body has he desired to control the mind of every living human mind on the Earth. However, due to the combined forces of the X-Men they manage to convince Magneto, and the rest of the Horsemen of Apocalypse to join them and fight against Apocalypse, before it's too late.

After Apocalypse's defeat, Psylocke was kindly invited to be part of the team for her heroic act and change of heart, adding her to be a new resident inside the X-Mansion, Storm and Archangel rejoined the team, and Xavier and Erik finally was able to reaffirm their friendship, and Erik returns to rebuild Charles' destroyed mansion. Though Charles asked him to stay, Erik declined and left, albeit on friendly terms this time. Eventually, Erik returned into leading the Brotherhood of Mutants, revealing that he still have some hatred for humanity left in him. Due to this, his friendship with Charles and his old friends has slowly went crooked once again, since they still have different ideologies regarding their perspectives on mutantkind.

The infamous and notorious villain of the X-Men known as Mister Sinister would intentionally led most of Magneto's loyalists into causing wreak and destruction on the city of Novi Grad, in Sokovia, without having any orders from Magneto, which immediately has gotten the attention of the X-Men. Little did the know, this strategy was one of the first known steps of Essex's plan as he would later unleash a larger event along with some the Earth's most powerful and villainous leaders, leading the Great Superhuman Movement.

As a result of Sinister's secret alliance and mutual allegiance to Hydra and the rest of the Movement Alliance, Magneto demands Sinister to leave his team, though during his time as a member he manages to earn the trust of several mutants, gaining allies inside the Brotherhood and those members include three of Magneto's loyalists, Multiple Man, Mastermind, and Hard-Drive, while the rest of the traitors had been brainwashed by the villain, leaving only few members who still stood by Magneto's side, his loyalists. Due to Sinister's betrayal, the Brotherhood broke into factions, Magneto's and Sinister's side.

After receiving Jean's telepathic cries to Professor Xavier, due to her pregnancy labor, the team immediately returned to the mansion, only to see her heavily mourn at the death of her and Scott's supposedly newborn child, Nathan, if it wasn't for (a clone of) Essex. Angered by the madman's sinister doings, the Professor and Logan decided to confront Magneto in his kingdom in Genosha, for holding the great responsibility of his organization's wrongdoings, especially for having one of his lieutenants, Essex, infiltrate the mansion just so he could assassinate the innocent unborn baby of Jean Grey, though all of this were later to be proven wrong, as Magneto had nothing to do with any of Essex's schemes with the Movement Alliance. As the five were on their way to the Citadel, the Brotherhood's hideout in Genosha, using the X-Men's Blackbird, only to be dragged by Magneto and some of his, who were hiding out across the rain forest landscape of the island. Magneto and his faction then later allied themselves with the entire X-Men, and several other heroic teams and organizations across the globe into reforming the Ultimates and the rest of the heroes to end Sinister's reign of chaos.

In the end of Sinister's short-lived reign, he was eventually founded by the mutant resistance once again in Genosha, after a dying Archangel threw a tracker on him without him noticing it, earlier during their battle. In the end, all of Sinister's clones were killed mostly by the overly-empowered Rogue, and he as well was finally defeated after he was defenseless after being surrounded by the X-Men and the Brotherhood, who used all their mightiest strength and powers against him that subsequently disintegrated the villain in the process, killing Mister Sinister and ending his tyranny in several countries all over the world and the Ultimate War once and for all.

Only a few weeks since the Ultimate War, most of the X-Mansion's residents, including some of the X-Men, has been unknowingly possessed under the influence of the mutant growth hormone and addictive drug, called the "Banshee," all for the sake of desperately trying to fastening their recovery from the traumatizing experience, albeit despite the fact that it gives off secondary, or even tertiary mutations to its users, once regularly taken. Originally, the drug was only an experimental substance previously discovered at the X-Man scientist Beast's laboratory by Cyclops and Emma Frost, though he then revealed to the Professor later on that the Brotherhood Mystique had secretly given him a sample of the drug, and was begging him to make an antidote in order to save her comrades, who were close into dying from addiction to the Banshee.

Beast was successful in formulating and developing for an antidote, giving it to Mystique afterwards, though he started on secretly experimenting with the remaining sample of the drug, hypothesizing that he may able to get rid of the negative side-effects, but retain the mutant growth hormone as its empowering effects, only before he could have started his research and experimentation. Along with the negative side-effects of the Banshee, it was also shown to be a psionic passageway to the realm of the powerful mutant entity mostly known as the "Devil with the Yellow Eyes" by those who frequently sees him in their nightmares, the Shadow King.

Eventually, his nightmarish and haunting plot to possess every single life on the planet were finally foiled to kill Professor X, Jean Grey and Emma Frost, with the help Xavier's omega level son Legion, eventually defeating the Shadow King inside their minds and causing him to yield in a painful loss and free them from his own dimension, for now. Upon waking up from their comatose, all the previous users of the shockingly terrifying drug was comforted by the rest of their teammates after having the antidotes applied to them, proving that they'll always be on each other's sides and to never be lost in their own emotions alone, never again.

The true origins of the mutant-empowering drug remains a intriguing mystery, but instead of trying to find out where it originally came from, Xavier told Beast as he forgave him for his actions of keeping the substance once, and told him that it would be the best option to never, ever to explore its true origin even further, before throwing away the last known sample of the Banshee into the secret furnace of his room.

Retrieved from "https://marvelcomicsfanon.fandom.com/wiki/X-Men_(Earth-61615)?oldid=269136"
Community content is available under CC-BY-SA unless otherwise noted.