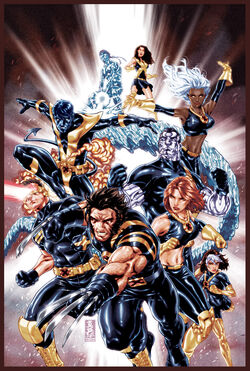 In 2012, Charles Xavier recruited and trained Ororo Monroe and Hank McCoy to control their Mutant abilities and eventually recruited them to his new team the X-Men, he used Cerebro to locate other Mutants and sent Hank to collect them. Hank McCoy gathered the Mutants: Scott Summers, Logan, and Jean Grey. They then agreed to join the X-Men team. The team went public a month later after their battle with Apocalypse and new members joined the group such as Kurt Wagner, Piotr Rasputin, Katy "Kitty" Pryde, Anna Marie and Bobby Drake. Beast also left the team a few months after.

In 2025 due to the new president John Damien made all superheroes illegal, the X-Men were forced to disband. Eventually in 2038 after illegal superheroes started rebel against the President, a successor team was formed with old and new members; The X-Force.

Retrieved from "https://marvelcomicsfanon.fandom.com/wiki/X-Men_(Earth-1315)?oldid=74749"
Community content is available under CC-BY-SA unless otherwise noted.