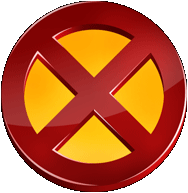 Professor Charles Xavier was the leader of the X-Men, a group of mutants who were trying to seek peace with the human race, educate young mutants in the responsible use of their powers, and stop Magneto from starting a war with humanity. The team is based at a Xavier's School for Gifted Youngsters, run from Xavier's Westchester mansion. The base included subterranean medical labs, a training facility called "The Danger Room," an aircraft hanger, and Cerebro.

Prior to the formation of the X-Men, Professor Charles Xavier and his associate, Raven Darkholme, were contacted by agents of the CIA to help investigate the Hellfire Club, a clandestine organisation of mutants with suspected criminal operations. The association with the CIA soon brought Xavier into contact with other mutants, including Erik Lensherr, Beast and Darwin.

Xavier's mutant group then came into conflict with the Hellfire Club, which led to the murder of Darwin at the hand of the Hellfire Club's leader. Xavier resolved to stop the Hellfire Club and began training his young group in preparation for conflicts to come. During subsequent confrontations with the Hellfire Club, Erik and Charles' views regarding the path of the emerging mutant race diverged, resulting in the end of their friendship and the fracturing of their emerging team. Erik, now going by the name "Magneto", left to form the Brotherhood of Mutants, with Darkholme following him, while Xavier continued to shape the others into a team with a higher purpose: the X-Men.

William Stryker sent his son Jason to Xavier's school in hopes of ridding his mutation, regarding it as a disease that he believed needed be cured. Xavier had no interest or belief in 'curing' mutants, which angered Stryker. Later, Xavier helped liberate the mutant children held prisoner by Stryker at Three Mile Island. He took them in an flew off in his helicopter with Scott Summers and Kayla Silverfox's sister, Emma. Summers would go on to lead the X-Men.

After finding Jean Grey, Xavier began controlling her with telepathic blocks because he believed her class 5 powers were too much for her to handle. Some time after finding Jean, the X-Men recruited 16 year old Robert Drake (Iceman), who was a class 5 mutant according to Xavier, together with teenagers Havok (Cyclops' brother) and Angel.

Professor X became increasingly worried after seeing what the Hellfire Club were doing: opening a school for teenage mutants, training them to be evil.

His friend and colleague, Moira MacTaggert finally convinced him to create a group of young mutants after receiving accepting Icarus, Cannonball's brother.

Extremely concerned by his sister's actions, Sam Guthrie asked Professor X to lead the new team. After evaluating the situation, Xavier told the young man that he could lead the team from the Mansion, and not in the field, as he would be needed in the X-Men. Cannonball was not convinced by this decision, but his brother, Jay, told him they would be alright. The School Staff started working towards this goal, handpicking their finest students to join the team. After gathering ten students, Cannonball officially green-lit the team, naming them the New Mutants.

Retrieved from "https://marvelcomicsfanon.fandom.com/wiki/X-Men_(Earth-1010)?oldid=218595"
Community content is available under CC-BY-SA unless otherwise noted.