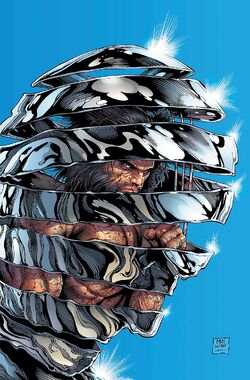 Weapon XVII, Logan, Young Man Logan, Wolverine, Hooded Man, Clonie, Wolvie, Some Wild Animal, True Wolverine, The One Who's The Best at What He Does, Heartless & Mindless Beast
Identity

Looks familiar, doesn't he? As if feels like staring into the mirror, showing who you truly are... Showing that you're the best at what you do, which isn't very nice... Remember?

During the last year of Ultron Revolution, Subject: X-24 was a clone of James "Logan" Howlett, the heroic Wolverine, his clone & daughter Laura Kinney, who was the previous subject X-23, and the late Victor Creed, the ruthless mutant supremacist known as Sabretooth. Created by the Alkali Corporation and Transigen project, X-24 became the most successful one that they've brought into life and was properly raised within the confinements of a Alkali-Transigen facility somewhere in the wastelands of Texas, nearing the border of Mexico and the entire Untied States. Being the last successful subject in the already-defunct Weapon X Program, X-24 was also labeled as Weapon XVII.

Raised and trained to be the perfect killing machine by his creator that is geneticist Zander Rice, the latter named him Albert after his late son, who unfortunately died whilst still an teenager during Ultron's global mayhem which resulted in billions more casualties. Reminiscing the realization that his son was also a mutant but Rice was initially hateful at him due to his innate mutantphobia, the scientist now used this opportunity to redeem himself by raising Wolverine's younger savage and more bloodlust clone.

Despite progressively developing a lingering emotional connection with Albert, however, Rice's irrational hatred and interest through mutants never withered throughout the years, with the senile scientist still seeing them as animals who were a great threat in leading humanity into extinction in the never-ending battle of natural selection in a dying world. After the tragic incident during the bombings at Central Park which was done under the hired mercenaries of Edward Stark, many unfortunate incidents have also followed the following night confirming the deaths of several heroes and villains across New York, both who were active and retired after the Ultron Revolution. X-24 was one of those assassins tasked by Alkali, in which he was instructed to wear a hooded suit during these stealth missions. During his task to assassinate of several heroes and villains, he ruthlessly slaughtered retired heroic mutants, such as Cyclops inside his residence and Magneto inside his kingdom in Genosha, who previously fought during the Ultron Revolution, something that was also done in order to frame the real Wolverine by leaving some of his blood sample in every crime scene before investigation. All of this were in fact, Edward Stark's morbid and inhumane work, deeming it necessary for his ultimate goal to work, ensuring that there would be no powerful surviving superheroes to find out his plans and get in his way to get the way it should be, under his leadership and guidance in the form of his secret new world order, a cause that something that Alkali was part and support of H.A.M.M.E.R's Secret Empire.

Aside from having Rice as his father figure, Albert was also trained and nurtured by Alkali nurse and scientist Elsie Dee, giving Albert a chance to have a maternal care by his side, though as determined as she was at turning Albert into a more decent and humane being, this development wouldn't last very long later on as Albert was genetically-engineered to have a limited cognitive function incapable of learning and understanding most tasks a normal human being could easily do and understand (e.g. verbal communications, emotions, etc.), rendering Albert to nothing but a mostly mindless, feral killing machine who only follows the orders of those who created and took care of him. Much to Elsie's dismay, she could only teach Albert and order him around for the most part. Unbeknownst to Elsie until she figured out later on, the instinctively-murderous and trained killer X-24 developed an instinct bonding with Elsie more than Rice, acknowledging her as her maternal figure, though to a later extent, Albert also developed a disturbing case of Oedipus complex at her, seeing Elsie as a mate and even perceiving Alkali's mercenary which was the Reaver Donald Pierce as a threat and rival, due to him one-sidedly flirting with Elsie, much to her disgust, with Albert even being overprotective of his nurse most of the time he visits the facility.

In response to the Empire's battle against the Resistance, Alkali had ordered X-24 to capture young surviving mutants across the United States, who were now considered as outlaws due to most of them being supporters of the Resistance against the Empire, for the next five years as they were subjugated into torturous experimentation. One of the captured mutants included Laura Kinney, X-23 herself, which Albert initially grew a sibling relationship with while they were cellmates, only to be dishearteningly betrayed and see her as another "competition" when he found out that X-23 and his nurse Elsie Lee were having a romantic affair in secret, something that Zander Rice and the Reavers ended up finding out not long afterwards. Seeing this opportunity to revive instinct of trust towards him instead of just Elsie, Rice secretly had Donald Pierce murder Elsie Lee in a gruesome fashion similar to how X-23 would kill someone, in which he even used some of her scent to fully convince, and make Wolverine's clone tap into his inner rage more than ever, diminishing every chance of humanizing with emotions the moment he saw Elsie's mangled body, believing that X-23 was her murderer, to which the latter was just as furious and devastated to see her lover, grimly promising to Pierce that he'd die from her claws for what he did once she gets the chance to escape her cell.

The experimentation on the young mutants lasted for months, and during the fall of Edward Stark's reign, Logan began to travel in the vast plains of the Texas searching for the last remaining secret main headquarters of the Alkali Corporation to find and rescue Laura Kinney and other young mutants from the hands of the mutantphobic scientist Zander Rice and the minds of Alkali. After discovering the entrance that leads to the secret headquarters, he was interrupted and were confronted by Donald Pierce and the Reavers, who briefly explained their intentions to weaponize and clone the young mutants for the Empire's future to survive. Their confrontation would eventually lead into a fight that lasted for hours while the rescue ensues in the background, before Logan manages to successfully kill the present members of the Reavers and some agents of Alkali and expect for Donald, whom he spared and later knocked him out unconsciously. Afterwards, Logan continuously search for Laura inside the base facility but before that, he briefly fought the raging X-24, who disguised himself as a mysterious hooded figure, who sneaked up upon him, but Logan manages to severely wound him causing for the figure to escape and vanish back to Rice and the Reavers to heal without interruption. He was wounded as well and struggles to find Laura until he found her in a secret laboratory along with other experimented and tortured mutant prisoners. He freed the rest of the mutants and rescued Laura, and later escaped with all the other mutant prisoners after defeating and killing the Reaver leader Donald Pierce, who tried to prevent them from escaping their infiltrated Alkali base.

Before and during the premature death of the universe known by many witnesses as the incursions, Logan and Laura were riding on an abandoned van, and was about to reunite with the rest of the Resistance after they noticed as they looked up to the sky, which suddenly turned red, to see another Earth, the one from another universe, looming above. They continued driving on the Texan road until their van was stopped and were interrupted by Zander Rice, who surprisingly manages to survive the assault when Logan infiltrated his base days ago, alongside the same hooded figure who tries to attack Logan and the Mutant Coalition earlier. The hooded man attacks Logan and they fought while Laura chased after Zander. Then it was revealed that the hooded man have the adamantium claws same as Logan's. Logan had a feeling of instinct, and his feelings never lie that the hooded man was someone who couldn't be trusted.

After slashing the face of the hooded man and getting rid of his hood, it was revealed that Albert, X-24, was a clone of himself, causing for Logan to be surprised in horror, since the clone possesses his old and more immature personalities when he was still young and was filled with raged and hate. The battle lasted for moments when Logan was close to being killed until he finally manages to stab the clone in the head with an adamantium fragment which X-23 gave him, dropping the unstoppable Albert on the ground, dead. Logan was triumphant, but was mortally wounded when he was impaled on adamantium debris several times. Laura and several mutant allies, who had finally defeated Zander, manages to catch up on Logan but it was already too late, he was already dying from his injures which his failing healing factor could no longer mend. Logan says his final words before dying in his daughter's arms.

Equipment: Seemingly those to James Howlett and Laura Kinney of Earth-61615.

Retrieved from "https://marvelcomicsfanon.fandom.com/wiki/X-24_(Earth-61616)?oldid=266543"
Community content is available under CC-BY-SA unless otherwise noted.