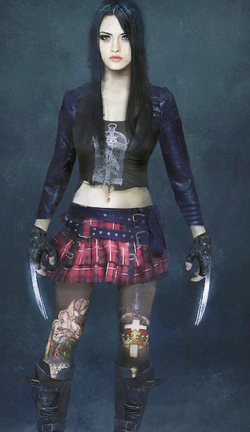 I'm a monster and an abomination. Point me in the right direction, and I'll strike.

After Apocalypse and Mister Sinister acquired Wolverine's DNA, they instantly began creating clones. The first 22 attempts were failures, but the 23rd was a success, and X-23 was born. She was artificially aged to be about 16-years-old, and then had her Skeleton coated in Adamantium.

She was then trained to be a killing machine by her creators. However, she came to realize she didn't like their way of life, and rebelled against them, running away. She was then tracked down by the leader of the X-Men, Jean Grey, who took her under her wing and became something of a surrogate mother to her.

X-23 later adopted the name Laura, and was eventually given her "father's" former codename, the Wolverine.

Retrieved from "https://marvelcomicsfanon.fandom.com/wiki/X-23_(Earth-9999)?oldid=245204"
Community content is available under CC-BY-SA unless otherwise noted.