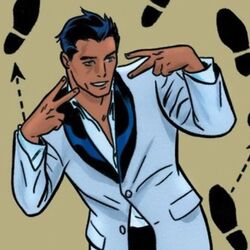 Wyatt ran away from his home and joined the Air Force directly out of High School. While there, he became good friends with Ben Grimm, who eventually requested Wyatt's help in Project: Pegasus.

Together, the two of them helped finalize the designs of the Marvel-1, and Wyatt was even offered the opportunity to help pilot the ship. However, he had become close friends with Johnny Storm, who he knew wanted to fly the ship, and declined. After the crew returned from their expedition mutated by the cosmic radiation, Wyatt was one of the few people from Project: Pegasus to still treat them as people.

When the Fantastic Four went on to form the Future Foundation, Wyatt was recruited to help teach the students about the adversity they will face in the world, as well as select students who were deemed capable of learning to fly.

Retrieved from "https://marvelcomicsfanon.fandom.com/wiki/Wyatt_Wingfoot_(Earth-101)?oldid=250005"
Community content is available under CC-BY-SA unless otherwise noted.