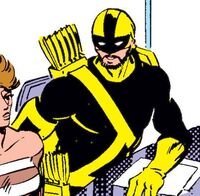 Everyone accuses me of ripping off Nighthawk because we're both powerless superheroes, but I assure you, Nighthawk didn't cross my mind when I decided to become Black Archer. Okay, maybe he did cross my mind...

Wyatt McDonald was a taxi driver in his hometown of Seattle. He decided to put his martial art and archery skills to good use and became the vigilante Black Archer. He married fellow vigilante Lady Lark and the two had a child together named Jason, whom they trained to follow their footsteps as Hawkeye.

Retrieved from "https://marvelcomicsfanon.fandom.com/wiki/Wyatt_McDonald_(Earth-32)?oldid=188341"
Community content is available under CC-BY-SA unless otherwise noted.