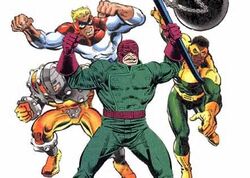 The Wrecking Crew were among the Masters of Evil that attacked Asgard they were sent to guard the bridge leading to earth, but they were defeated by the Ultimate Alliance and placed in S.H.I.E.L.D. custody.

Retrieved from "https://marvelcomicsfanon.fandom.com/wiki/Wrecking_Crew_(Earth-6109.2)?oldid=98010"
Community content is available under CC-BY-SA unless otherwise noted.