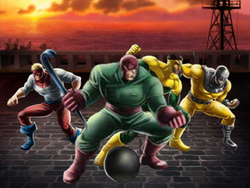 When Dirk Garthwaite, the original Wrecker, reclaimed his powers by gripping his enchanted crowbar in a lightning storm, a bolt stuck the tool as three other men held it as well. Ex-Physicist Dr. Eliot Franklin became Thunderball, Ex-Army Master Sergeant Henry Camp became Bulldozer, and Ex-Farmhand Brian Philip Calusky became Piledriver. Although this quartered the Wrecker's prodigious strength, the team remained together and remained a formidable force. Their powers are of mystical origin, and Thor is one of their common opponents.

The Wrecking Crew are also members of the Masters of Evil

Equipment: Bulldozer has a specially-made armored helmet, neck and shoulder apparatus that gives him added protection and invulnerability when ramming an opponent. The helmet partially affects his peripheral field-of-vision.
Transportation: None known.
Weapons: