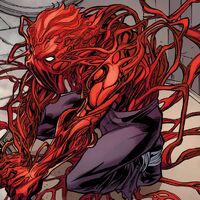 None (Depending on the host)
Identity

No Hair
Unusual Features
When shot or struck by an weapon (e.g. knife, machete). The splatter from the shot looks like blood is being sprayed out like what someone does when an human is shot.
Origin
Origin
Klyntar; Was an genetic clone of Carnage when the symbiote died, parts of it was taken by the Life Foundation and was brought back to life as an clone, has an clean slate and it's DNA altered.
Place of Birth
Life Foundation
Creators

Don't fear! I escaped from an organization and need to hide!

Wrath was born when the Carnage was made but killed in the Great Symbiote War. After the war was over, the Life Foundation took an piece of the inactive symbiote goo tissue and brought it back to life (abiet having no memory that they died).

During it's time at the Life Foundation, it went through harsh experiments, one of these experiments painfully altered it's DNA which effected it's DNA to be extremely strong. However, one day, he managed to escape.

After he died and was resurrected, he had his memory wiped, making him practically not hostile. During his time in the Life Foundation, he kept an more pacifistic role despite the pain he was enduring. After escaping and bonding with Christopher, he took it as an friend and was friendly to him.

Retrieved from "https://marvelcomicsfanon.fandom.com/wiki/Wrath_(Klyntar)_(Earth-7777)?oldid=234942"
Community content is available under CC-BY-SA unless otherwise noted.