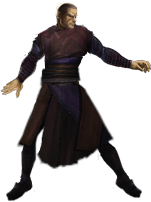 Wong was the descendant and look-alike of Kan, a Chinese monk who lived roughly one thousand years ago and was a student of the occult. For the ten generations preceding Wong's, the first-born males in his line have served the Ancient One, the former Sorcerer Supreme of the Earth dimension. The last of the members of Wong's family to serve the Ancient One was Wong's own father, Hamir the Hermit.

Wong was the first-born son of Hamir, and thus his life was dedicated to the Ancient One from earliest childhood. When Wong was four years old, Hamir presented him to the Ancient One. Subsequently, Wong was sent to a remote monastery to receive training in how to serve a master sorcerer. Wong's relatives were allowed to visit him on occasions. Shortly before Wong's tenth birthday, Hamir brought a young couple to the monastery to visit Wong and made a marriage pact with them, betrothing Wong to their as yet unborn daughter. During his training at the monastery, Wong mastered certain Oriental martial arts. He remains highly adept in the martial arts, although since actually becoming a servant he no longer practices them as much as he once did.

When Wong reached adulthood, the Ancient One sent him to the United States to her disciple, Doctor Stephen Strange. Wong was the first member of his family to come to America. Wong served Strange loyally and well for many years. During that time Strange succeeded the Ancient One as sorcerer supreme of the Earth dimension.

Wong is an expert in the martial arts of Kamar-Taj, achieving great mastery over it, although he has rarely used them in recent years. Hence, although Wong can overpower many adversaries, he is no longer a match for a master of the martial arts who keeps himself at or near peak condition.

Wong possesses the normal human strength of a man of his age, height, and build who engages in moderate regular exercise.

Wong's skill in magic, even recently, is nowhere near that of a truly adept mystic, and thus would be at a disadvantage while confronting a superhuman, whether versed in occult means or not.

Retrieved from "https://marvelcomicsfanon.fandom.com/wiki/Wong_(Earth-1010)?oldid=175386"
Community content is available under CC-BY-SA unless otherwise noted.