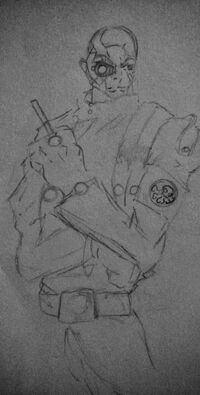 Baron Von Strucker was an ambitious and arrogant HYDRA agent under the Red Skull who quickly rose through Hydra, becoming proficient in both combat and tactics. During World War II, in Europe, Captain America encountered him in a Tower, the two engaged in a heated fire fight until Strucker was defeated and captured for interrogation. The Hydra Base was later destroyed.

Deathspore Virus: Von Strucker's bloodstream has been infected with the fatal deathspore virus which, rather then killing him, it instead grants him an array of superhuman abilities.

Baron von Strucker is a highly intelligent man in peak human physical condition. He is an exceptional hand-to-hand combatant, swordsman, and marksman. He is also a consummate military strategist and spy, and a master of disguise and excellent actor. He carries a sword and traditional firearms.

Retrieved from "https://marvelcomicsfanon.fandom.com/wiki/Wolfgang_von_Strucker_(Earth-981)?oldid=229212"
Community content is available under CC-BY-SA unless otherwise noted.