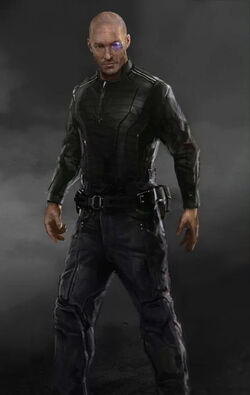 Wolfgang von Strucker was born into a lineage that had been supporting Hydra for centuries. Wolfgang rose through the ranks quicker than anyone ever had before, becoming dedicated to Hydra's mission of causing enough chaos throughout the world so that the people would be willing to sacrifice their freedom in exchange for their security.

While he was very adept in both combat and the world of science, Strucker was raised to be a believer of the great Hydra God, Alveus. Strucker's plan was to unite the world under Hydra's banner so that when they managed to return Alveus, he would have no trouble ruling the world. He always thought that his loyalty would be highly rewarded, and he would hold a position of power in the new world order.

This led to him strengthening his hold over the organization, never wasting his time as a secret S.H.I.E.L.D. sleeper. He instead began operating out of a base in Sokovia, delegating to only a few select agents that he could trust, including Madame Viper, Grim Reaper, and Baron Zemo. However, the base in Sokovia would eventually become compromised after the emergence of Ultron, which forced Strucker to relocate to the secret Hydra base located underneath the Empire State Building.

Eventually, Strucker and his forces were able to steal S.H.I.E.L.D. plans on how to operate the ancient Kree monolith, which would allow them to open a portal to the planet Maveth and bring Alveus back to the Earth. Strucker eventually selected Grant Ward to lead the expedition, and was delighted when he discovered that Hive had taken over his body in the return.

However, Hive quickly proved to be the farthest thing from what Strucker had envisioned. He cared nothing for Hydra, and his only plan was to unite the Inhumans of the world to overthrow humanity. Strucker began to doubt him, and in an attempt to make him fall in line, Hive murdered Strucker's son, Werner, right in front of him. Horrified, Strucker allowed himself to be captured by Phil Coulson's team of S.H.I.E.L.D. Agents, promising to give them whatever information on Hive and Hydra they wanted. However, unbeknownst to him, Hive had already swayed one of S.H.I.E.L.D.'s own Inhuman agents, Quake, who snuck into his interrogation room and unleashed her powers on him, completely shattering his bones before destroying his physical body with a splinter bomb.