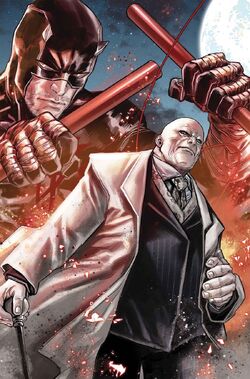 Kingpin of Crime, The King of Diamonds, The King of Monsters, The Employer, The Undertaker, The Brainwasher, Harold Howard, Wilbur, "Fatty," Fatboy
Identity

You were right, Mister Dutton... In every prison, there's only room for one kingpin...

Wilson Grant Fisk was a powerful and morally crooked financier & businessman with interests in the overall stability and bright future of New York City by willingly controlling the many countless crime waves which brought him into conflict with some of his partners who unexpectedly betrayed him, as well as fighting the new vigilante in town, Daredevil. His merciless attempt to destroy and rebuild Hell's Kitchen was ruined when his hidden criminal activities were leaked to the FBI by those who deemed to take him down influenced by the heroic actions and the motivations of the Guardian Devil, his fellow knights across the city of New York who came to help him, leading to his eventual arrest, now that his crimes are finally exposed, thanks to the last efforts of Nelson and Murdock that ensured his trial and incarceration.

Within his momentary imprisonment in Ryker's Island, Fisk began building up a loyal band of criminals and came to run the prison. Seeking to destroy the crime competition in New York by the time he got free, Fisk used his power on the inside and intentionally assisted in the Punisher's escape only several days after his trial, as he constantly desires to eliminate single competing every criminal empires with his own ruthless secret organization, as the new Kingpin of Crime throughout the most of New York City.

Learning from his mistakes that led to his punishment in prison, Fisk's second chance had given him the opportunity to carefully plan and plot his next goals behind scenes and further away from the laws reach, deeming to manipulate it with his own influential power if truly necessary. As Fisk’s reputation began to grow with wealth, influence, and power, so did the competition with other well-known organized crime. Even according to several organizations who experienced and witnessed Fisk and his empire's ultimate power first-hand, he was also fearfully labelled as the most infamous "king of mobsters," controlling organized crime on the East Coast with an "iron fist" with the help of his cooperative criminal empire, even while he was still inside his imprisonment.

Due to the slow but steady and progressive power that Fisk had efficiently gained and used throughout the years during his imprisonment within Ryker's Island, an opening began to grow for his ultimate chance to find a way out of prison sooner in a more non-violent manner, and finally continue the very core mission he had started for the city of New York. That day eventually came for Fisk, when an unknown sponsor, the one that was apparently contacted by his surviving subordinates who temporarily served as the "acting, front superiors" to Kingpin's secret criminal empire during his imprisonment, claiming to immediately process a so-called "contract" in ending Fisk's sentence in the next following days, much to Fisk's delight that his decision waiting patiently was indeed, worth it.

Retrieved from "https://marvelcomicsfanon.fandom.com/wiki/Wilson_Fisk_(Earth-61615)?oldid=223198"
Community content is available under CC-BY-SA unless otherwise noted.