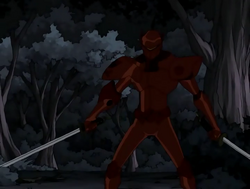 Who do I kill to get you to shut up?

Billy Russo was good friends with Frank Castle before his family was slaughtered. Russo later went off the grid and became an assassin for hire called Paladin, and was eventually hired by AIM to work as a permanent Enforcer for them.

Retrieved from "https://marvelcomicsfanon.fandom.com/wiki/William_Russo_(Earth-1515)?oldid=244659"
Community content is available under CC-BY-SA unless otherwise noted.