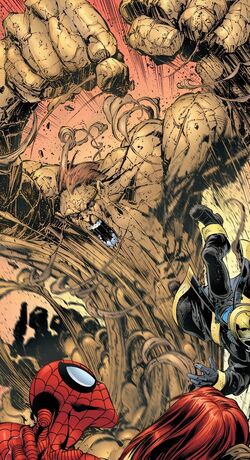 Well, Web-Slinger... Ya' always put me in the stir once too often, huh?! But again, ah can't really blame ya' for mah' own sins for too long...

William "Flint" Marko was born in Queens, New York around the fall of 1968. He was a member of of a criminal mobster crew in New York City, before realizing that he should stop all of his criminal doings, leaving the mob eventually. He finally got to live a very normal and a happy life and even got the chance to marry Marcy Alvarado, his long-time high school crush. They later had a daughter named Penny, whom Flint had cherished despite her unspecified frail chronic condition, but their happy lives was short-lived when the mob came back for him, threatening to kidnap wife and daughter or even considering to kill them had he not rejoin their crew in time.

Flint agreed and rejoined the crew for the sake of his family's safety, but with Marcy finding about his recent criminal actions, she and him had an devastating argument. Flint tried to explain the whole truth, but she ignored it, believing that Flint had rejoined the crew for the sake of his own personal gain as she knew about his dark past. The two eventually got divorced, with Marcy gaining the rights to take Penny with her despite Flint's pleas. Their divorce and his separation from his sick daughter had resulted into him losing his job, segueing into a life of crime without having anything else to spend time on other than support his family through illicit means.

Birth of the Sandman

Eventually, he left the crew and Flint became a lone petty crook in the streets of New York City, known by many under the alias of William "Billy" Baker. At one point in his life, Justin Hammer had caught Flint along with his former crew have him get arrested by the N.Y.P.D., but the truth is that he only wanted to arrest Flint is that so he could take him into his organization and experimented on him, being one of the results of an attempt to recreate the Super-Soldier Serum. Instead, the experiment led him to contact with sand that had been irradiated by the experimental reactor. His body and the radioactive sand bonded and changed Marko's molecular structure into sand. Since the experiment on Flint was a failure, he was locked in his containment unit for more than a month.

Shortly after Hammer was almost killed by Doctor Octopus, S.H.I.E.L.D. infiltrated Hammer's factory to take care of any experiments Hammer had been working on. Marko used this opportunity to escape and wreak havoc upon New Jersey and followed Hammer, who was still recovering in an ambulance so he can finally get his revenge on him for ruining his life. S.H.I.E.L.D., but with the help of Spider-Man, contained him and imprisoned him in a S.H.I.E.L.D. holding facility, but later escaped along with other imprisoned illegal super-soldiers including the devious Green Goblin, after Hydra had infiltrated the facility. After escaping S.H.I.E.L.D., he returned to his life as a petty crook and a criminal and now as a hired mercenary. From that point on forward, the infamous Sandman would eventually become one of Spider-Man's known strongest long-time foes from time to time.

With the Sinister Seven

Sandman continues his life of crime and eventually joined the Sinister Seven when he was recruited by none other than Norman Osborn, the Green Goblin (whom he had also seen escaping earlier during the prison assault), so they can team up with each other in order to take down their most hated enemy. Sandman would join the criminal group on-and-off again after dealing with his various encounters with other superheroes and super-villains whom he had fought before. After losing a battle against the web-slinger and the Defenders by the end of Ultimate War, the disbandment of the Sinister Seven rendered Sandman to abandon his teammates and revert surviving on his own before returning to crime, only to be caught by the patrolling Avengers. Easily paralyzed by Thor using his thunder-channeling Mjolnir, S.H.I.E.L.D. sealed Flint in various jars and kept them frozen within a classified facility, wherein he was often monitored by its staff and some of his parts being studied by the science division.

Whilst encased and imprisoned for almost two years, the metamorphized Flint sank into episodes of depression wherein he began to regret and repent most of his decisions, sometimes contemplating suicide out of guilt by the amount of casualties the Ultimate War had brought. Unbeknownst to him, his thoughts were eventually overheard by through Fitz-Simmons' invention that allowed them to decode Sandman's thoughts through vibrations. Then current director Phillip Coulson used this opportunity to assess Flint's sincerity in his times of contemplation, by having him be recruited as a field agent, albeit monitor and contained in using his powers at first. Sandman considered the agency's once-in-a-lifetime offer after realizing how unhappy he has become with his life as an infamous superpowered rogue, although it was the assurance of having him get the chance to visit and probably even become reunited with his daughter Penny that instinctively drove him into a path of redemption. In the long run, Flint would even show his change of heart and sides after helping out his former archenemy Spider-Man and the Defenders in their quest to end Miles Warren's Genetic Vendetta by 2026, wherein he faced against his former villainous teammates, most notably Electro who finally met his fate over his dream of becoming pure energy.

Sand Conversion: The Sandman possesses the superhuman ability to convert his body into sand by mental command. The sand functions identically to, and appears to be, normal flesh. However, he can convert all or parts of his body into animated sand at will. His brain has attained subliminal awareness of all granulated particles of his body. Through conscious effort, he can affect the degree of molecular cohesion between the numerous adjoining surfaces of his particles and thus cause locomotion of discrete volumes, down to the individual grains. After being studied by S.H.I.E.L.D., it was discovered how Sandman is basically immortal in the sense that he no longer ages, and the discovery that he no longer require the need for food and water to survive.

Retrieved from "https://marvelcomicsfanon.fandom.com/wiki/William_Marko_(Earth-61615)?oldid=276897"
Community content is available under CC-BY-SA unless otherwise noted.