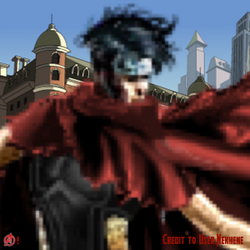 Billy Kaplan was the eldest of three sons born to Reform Jews Jeff Kaplan, a cardiologist, and Rebecca Kaplan, a psychologist.

Billy had trouble with bullies in school due to his sexuality and fanboyness. Once while sitting in front of Avengers Mansion, he briefly met the Scarlet Witch, his favorite Avenger. She gave him some words of encouragement and told him that he "could take care of himself". Billy took her advice and stood up to his bully, John Kesler. Unfortunately, Billy's electrokinetic powers emerged for the first time and nearly killed Kesler.

Billy was one of the people listed together with his boyfriend Teddy Altman in the Program compiled by the Vision to be used to find those who could've been he and Wanda's dead children's reincarnation under the excuse of a team of Young Avengers.

Billy and Teddy found themselves on Asgard during Ragnarok, and the Scarlet Witch's son joined the Thor Cops after fighting alongside Beta Ray Bill and Thor Girl. They were sent back home by Loki, seconds before his death.

Wiccan has a wide range of super powers, derived from an unconfirmed source. His origins make it possible Wiccan is both Mage and mutant. Even accepting that Wiccan is the reincarnated son of the Scarlet Witch, where exactly his powers come from is unclear. If his was purely a spiritual reincarnation, then he would not necessarily inherit his mother's mutant genes. Recent questions about the Scarlet Witch's parentage make it even less certain she had an X-gene to pass on. Wiccan's power might also be a purely mystical birthright, or derived from Wanda's status as a nexus being. Wiccan's destiny as the next Demiurge resembles the fate that the Time Keepers worried about if Wanda ever had children.

Wiccan has demonstrated the following powers:

Human, able to be augmented by magic and reality manipulation.

If Wiccan can't hear his spells, they don't work at all.