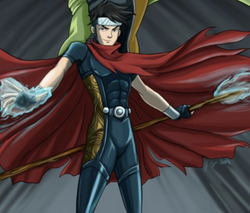 You see, I don't technically exist on this plane of existence, which means I don't play by your rules.

When the Scarlet Witch had a mental breakdown and created her own pocket dimension, she mystically manifested her own twin sons, Billy and Tommy. However, after intervention from the Avengers and Doctor Strange, Wanda came to realize they were not real and was forced to restore reality.

However, Billy had been reborn into the real world as a member of the Kaplan family, and it was as if he had always existed. He was raised as a normal child in the Kaplan family, growing up in California. But when he reached maturity, he discovered he was connected to the mystical realm and began studying the art of sorcery in his free time to try and learn more.

It wasn't long until he got a reputation as "that weird Wiccan kid", which attracted the attention of Riri Williams and Kate Bishop. They recruited him to join the Young Avengers and gave him the code name Asgardian, which he never really felt connected to. Over time, he and his teammate Hulkling began to fall in love.

Eventually, the Young Avengers went on a mission to break metahuman teens out of a holding facility, and discovered one of them, named Tommy Shepherd, looked exactly like Billy. Billy and Tommy immediately felt a connection to each other, and began to investigate their true heritage. They went on to discover the truth about the Scarlet Witch being their mother who reincarnated them into the physical world. Billy then decided to change his codename to Wiccan, to feel more connected to his mother as they began their quest to reunite with her.

[[Category: In a Relationship with Teddy Altman Characters]]