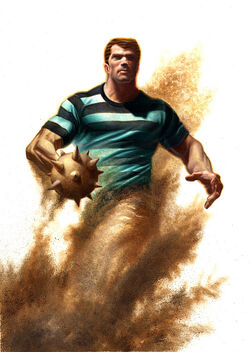 Sandman's history is identical to that of his Earth-616 counterpart up until Juggernaut was launched into space by Skaar. William Baker was near the site of a robbery being committed by Videoman. He decided to intervene after seeing Juggernaut fighting him. They defeat him, and form a partnership. They defeat several menacing threats. He continues to serve as an MI-13 agent, gathering intel on the side.

After Carter Ghazikhanian engages in battle with Juggernaut, he joins the group, and they set out to track down Phoenix (secretly, Juggernaut wishes to resurrect Squidboy). The group is then attacked by Vulture, who had been trailing Sandman the entire time, which Juggernaut had noticed, and was angry that a partnership between them had ended. Sandman insists he has reformed, so Vulture attempts to kidnap Carter, but is tackled by Juggernaut. This increases the bond between the three.

Sandman was present for the resurrection of Squidboy, and decided to remain with the group as long as it lasted.

The Sandman is vulnerable to heat: temperatures of 3,400 degrees Fahrenheit can cause his highly impure silicate composition to fuse into amorphous silicate (glass).

There appears to be no limit to how long the Sandman can remain in his sand-state. If he were to be rendered unconscious while in his sand-state, he would remain in that state, although the relaxing of his control over his particles would cause him to become an amorphous pile of sand.

The Sandman's mind continues to function in astral form even when he has turned his head into sand and even when the particles of sand that composed his brain are widely scattered. The limit to how far the particles of his brain can be dispersed before he is unable to reassemble is not yet known.

Retrieved from "https://marvelcomicsfanon.fandom.com/wiki/William_Baker_(Earth-858)?oldid=41105"
Community content is available under CC-BY-SA unless otherwise noted.