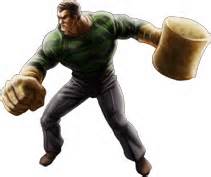 Little is known about Sandman's life before the Secret Invasion. It can be assumed to be similar to his mainstream counterpart.

Sandman was one of the supervillains hired by Doctor Octopus to form the Sinister Six.

When Vulture got a lead on the missing Daredevil & Ske-Hulk, Taskmaster contacted Doctor Octopus. He was willing to spare Sandman to join the raid on an abandoned A.I.M. base. After that, he contacted Hydro-Man to become a member of the Ultimate Alliance to fight the Skrulls.

After the Ultimate Alliance becomes a separate faction: Storm goes missing when investigating the redirection of S.H.I.E.L.D. transports, so a recovery team (Sandman included) is sent. Sandman, his long-time enemy Spider-Man, Daredevil, and Wolverine infiltrate the facility to find the Living Laser. He says the Skrulls have set up base in the building, and have been taking mutants prisoner. The five superhumans fight Skrull versions of Quicksilver (who is crushed to death by falling debris from the fight) & Sunfire (who escapes), before confronting a Storm Skrull. After accidentally killing said Skrull by sending her into a electrical generator; the 5 free the real Storm, Quicksilver, and Sunfire before escaping the facility.

Retrieved from "https://marvelcomicsfanon.fandom.com/wiki/William_Baker_(Earth-6109.2)?oldid=223390"
Community content is available under CC-BY-SA unless otherwise noted.