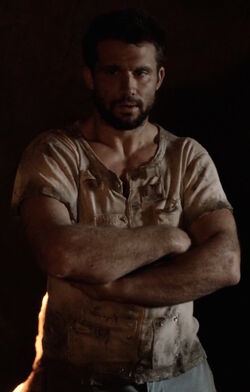 Daniels spent most of his time focusing on his work; as a result, he never had a long term girlfriend as he always felt he would find time for that later. Daniels was a test pilot for the Air Force, when he was recruited by NASA. While working at NASA in 2001, Will Daniels was offered the chance to join a team in going through a portal created by the Monolith and learning to where it transported them.

Always wanting to experience the most difficult of challenges, Daniels eagerly volunteered alongside scientists Austin, Brubaker and Taylor and was given the task of protecting the scientists while on the planet. Once they arrived, they set up base and began work while waiting for NASA to figure out a way to bring them home.

It has this way of getting inside your head and just making you crazy. Austin threw himself off a cliff. Brubaker set himself on fire. Taylor took an axe to the gear and then he came after me. I had one job; keep them alive.

One day, the crew decided to explore while Daniels stayed behind and protected the camp. During this time, a huge sandstorm briefly swept the land. When they returned, each of the scientists began losing control of their sanity. Before long, Austin and Brubaker committed suicide by jumping off a cliff and setting himself on fire, respectively. Taylor's madness caused him to destroy much of the camp before attacking Daniels; after a brief fight, Daniels was forced to kill his friend and bury his body alongside the others.

Now alone on the planet, Daniels used his skills to build an underground home as well as various traps and hideouts to protect himself. He became certain that there was a being in the sandstorm which caused his crew to turn mad and as a result did everything he could to avoid the storms and protect himself. After months of living alone, Daniels came to the decision that he would never be rescued and would live out the rest of his days alone on the planet.

--Will Daniels and Jemma Simmons

Due to research into the stars conducted by Jemma Simmons, they were able to determine when the sun was due to rise over the planet, the first sunrise in eighteen years. The pair shared a kiss as they stepped outside and waited to see for the sun for the first time in over a decade. Suddenly Simmons spotted a flair being fired in the distance and determined it must be Leo Fitz finally having found her.

Simmons ran across the desert with Daniels as they tried to find the source of the flair, but became separated as a sandstorm appeared. Daniels heard Simmons call out that she could see a NASA space suit and had deduced that his team had found him, but Daniels warned her that it could only be the deadly being on the planet trying to trick her mind. Daniels ordered Simmons to run as he drew he gun and engaged the creature, firing his only bullet at It while Simmons followed the sound of Leo Fitz's voice.

As the sun rose over the planet, the sandstorm ended and Daniels found himself once again alone on the baron wasteland planet, as Jemma Simmons had disappeared into the portal to be reunited with her friends back on Earth. Daniels could not even look at the sunrise as he threw his now useless gun away and walked back to his hideout to seemingly spend the rest of the years completely alone. As he walked away the sun once again set and the planet was plunged into a darkness which would last another eighteen years. Daniels was killed and his body was possessed by It.

Retrieved from "https://marvelcomicsfanon.fandom.com/wiki/Will_Daniels_(Earth-1010)?oldid=198494"
Community content is available under CC-BY-SA unless otherwise noted.