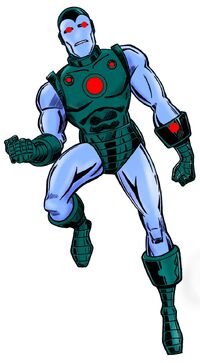 Single
Occupation
Scientist, professional super villain
Education
College graduate
Origin
Origin
Wesley Swindelman was a brilliant yet ridiculed scientist who despised the Avengers for being so much more powerful than him. In an attempt to defeat them, he gave himself powers taken from them and designed a suit based off of Iron Man's. Calling himself Master Mechanism, he plots to destroy the Avengers.
Place of Birth
New York City, New York
Creators

Not much is known about the early life of Wesley Swindelman besides his college education.

Swindelman developed a career as a scientist. Closely watching the Avengers and even being saved by them once or twice, he developed a hatred for them, jealous of their powers. He collected a blood sample from Captain America left behind after a battle and synthesized the Super-Soldier Serum after intensive work, though only enough for one person. He injected himself with it and bombarded himself with vita rays, giving himself the powers of Captain America. He also trained in physical combat and managed to steal a gaseous from of Pym Particles from Hank Pym, the Ant Man. Swindleman also designed and built a suit that would rival Tony Stark's Iron Man suits, giving it electric powers to counteract Thor. Calling himself Master Mechanism, he planned to defeat the Avengers and prove he was better.

Genetically Enhanced Physiology: Swindelman's powers come from the experimentation he has subjected himself to, including injecting himself with a sample of the Super-Soldier Serum synthesized from Steve Rogers's blood, taking Pym Particles stolen from Hank Pym, and giving himself Wolverine's healing factor.

Size Reduction: Swindelman possesses the power to reduce himself to the size of an ant, approximately one-half inch in height, by means of the subatomic particles known as the Pym Particles. The nature, source, and mechanics of the Pym Particles remain unrevealed. Originally, when Swindelman inhaled a gas containing the Pym Particles, the Particles interacted with the electrical impulses of his brain, creating an organism-wide "reducing field." Thus activated, the field reduced his entire body at a uniform rate to the smaller size he desired. Although he usually chose to reduce himself to one half inch in height, he could reduce his size to any size between that and his normal size. Usually, Swindelman did not compress his mass into his smaller size. Instead his mass was somehow extended into an extra-physical dimension that was opened by the activating of the Pym Particles, from which the mass could later be reclaimed. Strangely, because Swindelman's mass was extended extra-dimensionally when he was at ant-size, he retained his full human-size strength at that size. To return to normal size, Swindelman inhaled another gas which contained another type of Pym Particles. These Particles interacted with his brain to create an organism-wide "enlarging field," which is energized by mental command. Thus Swindelman could grow back to his normal height and reclaim all of the mass that was extended extra-dimensionally. He later developed the ability to do this without Pym Particles.

Size Addition: Swindelman also discovered Pym Particles which interacted with his brain to enable him to grow to gigantic height. The growth process required the rapid acquisition of bodily mass, comes from an extradimensional source. This extra dimensional mass fortified all of his cellular tissue, including his bones and muscles, enabling him to support his increased weight, and giving him superhuman strength and durability. He is capable of growing hundreds of feet tall exceeding the heights of even the tallest buildings in New York. He can grow past the barriers of the "Microverse" to enter Overspace, a point above and apart from all other realities where it is possible to confer with abstract cosmic entities. He later developed the ability to do so without Pym Particles.

Entering Other Planes of Existence: Swindelman can use the Pym Particles to shrink to sub-microscopic stature. When 99.99 + % of his mass is extra-dimensionally shunted, he is sent into a "subatomic universe" or "microverse," one of countless alternate universes accessible to Earth only by the mass-shunting process. Such as shrinking down to enter the Microverse, and on one occasion growing into the plane inhabited by such cosmic beings as the Living Tribunal and the In-Betweener.

Genius Intelligence: Mechanism is a scientific genius in many fields, including Biology, Nuclear Physics, Robotics, and Electronics. He is also a gifted engineer.

Master Tactician and Strategist: Swindelman is an accomplished strategist and his brilliant tactical sense allows him to alter any strategy to fit the changing need of the situation.

Master Martial Artist: He is an expert in hand-to-hand combat being very skilled in multiple martial arts through his training. Swindelman utilizes Boxing, Judo, Defendu, Kickboxing, Jujutsu, Okinawa-te and various other disciplines with his gymnastics ability creating a style that suits his strengths and enables him to use his knowledge to the best of his ability.

Master Acrobat: His training and experience have made him an expert acrobat, gymnast, and aerialist. He often utilizes these talents in combat for both evasive and offensive purposes.

Expert Marksman: He can throw most projectile weaponry with great aim and is well-versed in the use of firearms though his suit provides laser-guided targeting.

Expert Swordsman: Swindelman is proficient with swords and staffs.

Weapons Proficiency: He does not typically utilize weapons other than those in his suit, but in desperate situations he wields additional weapons to ensure victory. He is proficient in wielding swords, daggers, throwing knifes, staffs, sticks, tonfa, axes, maces and even firearms.

Without his armor, Swindelman has been seen curling 500 lbs (227 kg), as well as bench pressing 1,100 lbs (500 kg), both of which are consistent with his stated strength level of being able to overhead press lift 800 lbs (363 kg). He is further noted as having the strength of 10 men. The armor amplifies Swindleman's already impressive strength to incalculable levels, enabling him to normally lift (press) roughly 100 tons (100.4 thanks to the SSS). If sufficiently powered by an outside source, the armor can achieve massively higher levels.

Arrogance: Swindelman is extremely arrogant and is usually defeated when someone takes advantage of it. Mentally Unstable: Swindelman is unstable mentally, possibly due to the many abilities he has given himself. Nega Blast: Mechanism's Nega Blast uses up all of the energy in his suit besides relatively weak backup systems.

Retrieved from "https://marvelcomicsfanon.fandom.com/wiki/Wesley_Swindelman_(Earth-4577)?oldid=234435"
Community content is available under CC-BY-SA unless otherwise noted.