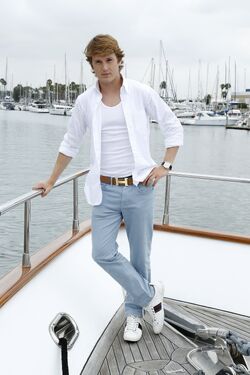 The son of HYDRA's leader Baron Wolfgang von Strucker, Werner von Strucker was raised away from his father's work. Although he was aware of what his father did, he was not allowed to enter into that world of terrorism and world domination. Instead, von Strucker lived a life of luxury, using his father's money to purchase large boats and host parties with beautiful women.

While hosting another party, von Strucker's boat suddenly became infested with rats which poured onto deck. While the women ran away in fear, Grant Ward appeared and began attacking von Strucker's security team. Despite their best efforts, the guards could not defeat the highly trained HYDRA agent and before long almost every guard was unconscious. When the final guard hit Ward in the face, von Strucker watched as Ward shot and killed him. Ward then turned his attention to von Strucker and captured him.

Ward brought von Strucker to a secret warehouse where he began to berate the young millionaire over never having earned a single thing in his life, instead wasting all of his father's money on parties and expensive items like boats. Ward demanded that he hand over all his wealth to them by giving over his banking passwords; when von Strucker resisted, Ward punched him in the face and made it clear that he was not asking for his money but was going to get it. In order to force the passwords out of him, Ward ordered his solider Kebo to begin torturing him.

Kebo began to mercilessly beat von Strucker, mocking him for his cowardliness. However, von Strucker pretended to crawl away from Kebo out of fear, but instead grabbed a blade and stabbed his torturer in the leg before grabbing a solid item and hitting him repeatedly. Grant Ward then entered the room; when von Strucker tried to use his family as leverage, Ward made it clear that he knew who he was, noting that Baron Wolfgang von Strucker was one of HYDRA's greatest leaders. Ward told him that he had earned his respect and gave him tacos as a reward.

Grant Ward and von Strucker then explored the HYDRA base where they discussed their family histories. Ward offered von Strucker a place with him as he had earned his respect and proved his worth.

You know why most people take Psych, right? They're trying to figure out families.
"You got me there, you wouldn't believe how messed up mine is.

For his first mission working for the new HYDRA, von Strucker was instructed by Grant Ward to enroll at Culver University to study Psychology 101. Arriving at the university, von Strucker quickly introduced himself to his new tutor: Andrew Garner, the ex-husband of S.H.I.E.L.D. agent Melinda May. Garner spoke to von Strucker, noting that most people take Psychology because of family issues; von Strucker assured him that his family was very messed up.

Hey professor, where you been? You know you're a tough guy to track down."
"What's going on here Alex?

Working under the order of Grant Ward, whose base of operations was under attack by Lance Hunter and Melinda May, von Strucker was ordered to corner Andrew Garner in a store. As the encounter was filmed for May to watch, von Strucker entered the shop alongside three other HYDRA agents and trapped Garner, who was confused by von Strucker's presence. The agents and von Strucker then revealed they were carrying fuel and a lighter.

When Ward did not order him to stand down due to Hunter firing upon him and causing him to escape, von Strucker's orders remained to kill Garner. However one of the shoppers was revealed to be an undercover S.H.I.E.L.D. agent who defended Garner but was soon shot and killed. As von Strucker hid from the gunfire, he watched as Garner stepped forward and transformed into a monstrous being with grey skin and long dreadlocks who massacred the HYDRA agents by using blasts of energy to rip open their chests.

In the resulting struggle, all of von Strucker's guards where killed by Garner and von Strucker barely managed to make it outside. Garner looked over the chaos and used the lighter to set fire to the store. Having escaped the violence, von Strucker managed to run outside and duck behind a car moments before the entire store erupted in a huge fireball, leaving von Strucker in a state of shock at having witnessed the seemingly impossible and knowing he had failed Grant Ward, who would undoubtedly be furious at the failure.

He's a monster."
"You were right to ask me to come."
"I didn't know where else to turn, I figured you and my father must have dealt with guys like Ward all the time.

Knowing that Grant Ward would have him killed for failing to kill Andrew Garner, despite the circumstances of the failure, von Strucker took what money he had and flew to Lisbon where he sought the help of his father's old HYDRA ally Gideon Malick. Strucker explained what had happened to Malick, calling Ward a monster who would stop at nothing to have him killed, and begged him to help him to kill Ward; Malick seemed sympathetic and agreed to take care of everything.

I tried to do what Ward wanted. I tried to kill him."
"Him? Professor Garner?"
"We had him. But I didn't know he'd change into that thing.

--Werner von Strucker and Melinda May

Gideon Malick instead betrayed von Strucker and gave up his location to Grant Ward, who sent Kebo to find him. Strucker was quickly overpowered by Kebo and his soldiers who tied him to a ceiling and proceeded to torture him by beating him mercilessly and cutting into his skin, all of which Kebo took great pleasure in inducing. Suddenly the door was kicked down by Melinda May and Bobbi Morse who were armed and ready for a fight. Kebo stabbed von Strucker in the gut before leaving May to fight the guards.

May subdued the guards and took off von Strucker's handcuffs before asking him where she could find Ward. Strucker told her what had happened when he had tried to kill Andrew Garner, revealing that he had witnessed Garner transform into a monstrous beast who had massacred the HYDRA guards. Knowing he was dying, von Strucker asked May what Garner was and she told him she did not know; von Strucker then closed his eyes, going into a coma.

Wanting revenge on Gideon Malick for the assassination of Rosalind Price, Phil Coulson attempted to get von Strucker to release as much information as he could on Malick, in the hopes of discovering his location. Just after S.H.I.E.L.D. had gotten von Strucker out of his comatose state, they started having troubles keeping Strucker alive as his brain was damaged due to his injuries sustained previously in Lisbon, Portugal, remembering the pain he endured of Kebo stabbing him multiple times as Strucker begged for the mercy of death.

Eventually, a hesitant Lincoln Campbell had managed to put Werner out of his state by shocking his head with electricity, allowing other areas of von Strucker's brain to stimulate. Strucker explained how Malick had sold him out to Grant Ward, gaining more glimpses of the pain he had felt when tortured by Ward's thugs and gave out how he had came in contact with Malick via telephone, which he gained access to by speaking to a HYDRA agent, and giving him the coded phase that allowed him to contact Malick.

Retrieved from "https://marvelcomicsfanon.fandom.com/wiki/Werner_von_Strucker_(Earth-1010)?oldid=220349"
Community content is available under CC-BY-SA unless otherwise noted.