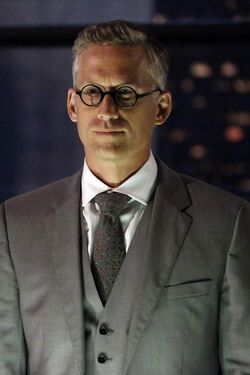 Earth-1010
Base Of Operations
Unknown; formerly The Rat, Hydra Base, Austria
Characteristics
Gender

Dr. Werner Reinhardt was a member of Hydra as far back as World War II. He kept his headquarters in Austria, where he performed experiments on items such as the "Obelisk," a device that killed anyone who touched it. After a young woman survived coming into contact with it and seemed to activate the device, Dr. Reinhardt could not wait to open her up to see what made her tick. However, Dr. Reinhardt's excitement was cut short as he was soon informed of the Red Skull's demise. Dr. Reinhardt had his headquarters evacuated to prevent his stockpile of dangerous items, including the Obelisk, from falling into Allied hands. As he was evacuating, his facility was attacked by the SSR led by Agent Peggy Carter and the Howling Commandos. As Reinhardt was being taken into custody, he reminded Agent Carter of Hydra's motto - "Cut off one head, two more shall grow in its place". Carter retorted that they'll just keep cutting their heads off.

The SSR had Dr. Reinhardt imprisoned in a facility known as "The Rat," where Agent Carter would routinely interrogate him. He offered his services to the SSR, as they had a record of recruiting former Hydra scientists to their cause. However, after the horrors that were found in his laboratory, Dr. Reinhardt's offer was not only declined, but he would be isolated in the Rat for the rest of his life.

It's time you choose a path forward in HYDRA. And with your father gone, I believe you should choose mine."
"And why would we do that, old man?

By 1970, Reinhardt learned that HYDRA was rebuilt and gained some influence in it, even though he remained locked in the Rat prison. He also learned about the legend of HYDRA's origin and the Monolith that was supposedly used to send people to another planet. As a man of science, Reinhardt considered the belief in some ancient HYDRA God a nonsense. However, he knew that the head of the Malick family, the man in possession of the Monolith, regularly cheated when he and other believers assembled to choose the next Traveler who would be swallowed by the Monolith.

When the head of the Malick family died, Reinhardt sent two of his henchmen to bring him Malick's sons, Gideon and Nathaniel. When the boys arrived, he openly told them that he expected them to reject their ancient traditions and choose his path forward in HYDRA, the path of science, not religion. The brothers called him a coward, saying that becoming a Traveler was a great honor, to which he replied that their rituals were foolish, unlike their late father who survived many ceremonies by doing a parlor trick. The brothers didn't believe him, but Reinhardt told them to take a look at Paradise Lost, a book in their father's study, which would prove most illuminating.

After 44 years, Undersecretary Alexander Pierce had Dr. Reinhardt secretly pardoned, and sent an undercover Hydra agent to retrieve him. Dr. Reinhardt was given the identity Daniel Whitehall and was returned to Austria, where his former test subjects had been collected. Among them was the young woman who survived touching the Obelisk, and much to Dr. Whitehall's surprise she had not aged a day since he last saw her. He ordered his men to take her to his operating room, where he had her organs removed. He then had the organs placed inside him, causing him to be rejuvenated, his appearance what it was before he was imprisoned in the Rat. The remains of the young woman were thrown away, only to be found by Skye's father, who swore on his love's corpse that he would do the same to her killer.

Decades later, after the modern incarnation of Hydra infiltrated S.H.I.E.L.D, Whitehall was still an active member of Hydra. His subordinate, Sunil Bakshi, came to inform him of their agent Carl Creel's success in retrieving the Obelisk. Unfortunately, Raina stole the 0-8-4 before Creel could hand it over to Bakshi.

Dr. Whitehall was next seen using a method of psychological torture known as the "Faustus method" to brainwash a captive S.H.I.E.L.D. agent into joining Hydra. These efforts were ultimately successful, as the agent later complied with her orders from him when Bakshi recommended that he meet a particular scientist in person.

While Bakshi went to Miami, Florida, disguised as Glenn Talbot to retrieve a 500-year old painting with Obelisk runes drawn on the back, he encountered Agents Phil Coulson and Melinda May, who were after the painting too. Upon learning of this, Whitehall ordered Bakshi to try and gain Coulson's confidence, believing he could help solve the runes. However, Coulson discovered their duplicity and escaped with the painting. Whitehall later tracked down Raina and slapped a small device on her hand that instantly paralyzed her. He threatened her with death if she did not deliver him the Obelisk within forty-eight hours.

Whitehall later tested a reverse-engineered bioweapon from samples from an Obelisk victim on a wedding reception which was attended by Naval members of an anti-Hydra taskforce, but it failed to kill everyone and was deemed a failure. Thus, Whitehall became more determined to recover the Obelisk to perfect his weapon. However, when two S.H.I.E.L.D. moles, Agents Jemma Simmons and Bobbi Morse were discovered and escaped, Whitehall was preparing to move house when Cal barges in, presenting the Obelisk and offered an alliance to destroy Coulson and the rest of S.H.I.E.L.D.

Whitehall retaliated against S.H.I.E.L.D. by sending Marcus Scarlotti and his mercenary team to assault the United Nations during Talbot's anti-S.H.I.E.L.D. speech, to frame his enemies for the attack. This was all a ruse to lure out S.H.I.E.L.D. agents. However, S.H.I.E.L.D. tracked down Scarlotti and handed him over to Talbot, while Senator Christian Ward publicly labelled Hydra as the true threat.

Frustrated with his scientists' lack of progress with the Obelisk, Dr. Whitehall had Cal brought to him to reveal what he knew about the device. He offered to fill in the blanks in Dr. Whitehall's intelligence on the Obelisk, revealing to him that it was a key that would open up a temple in a hidden city for those it "divined" to be worthy. Citing how he had nothing to lose, Cal offered to get Dr. Whitehall inside the temple. Not long after, Grant Ward arrives in Dr. Whitehall's office after he escaped S.H.I.E.L.D.'s custody and killed his brother and parents. Dr. Whitehall reinstated Ward as an agent of Hydra, and introduced him to Cal.

Whitehall later sent Agent 33 to lead a team of Hydra agents to capture Raina, as she had been spared by the Obelisk, for the purpose of opening up the temple. While S.H.I.E.L.D. managed to get to her first, Agent 33 informed Whitehall that Raina let slip to her that she has a tracker when she mistook her for Agent May. Whitehall then sent a squadron of Hydra Quinjets to intercept the cloaked Bus and threatened to destroy the plane if they didn't hand Raina over to Hydra. Whitehall later learned from Agent 33 that Ward did indeed extract Raina, but took an additional hostage, Agent Skye, which Whitehall found curious, and was furious to hear that Ward didn't destroy the Bus, prompting Agent 33 to give the order, though the Bus faked its destruction.

Whitehall later traveled to San Juan, where the Kree city was located underneath. He then brought Cal, Raina and Ward together to commend them on their success. He then brought Skye into the room, asking Ward why he brought her. Raina answers that Ward is in love with Skye and believes that reuniting her with her father would make her fall for him. Whitehall then forces Skye to pick up the Obelisk, which only glows, not petrifies her, at which he deduced that she is the daughter of the woman he butchered.

He subsequently had Skye and Ward bound and Cal restrained with a shock device on his neck. He taunted Cal, intending to deprive him of his vengeance and have him watch as he experiments on Skye, only for S.H.I.E.L.D. to attack the compound. Whitehall went to assign Agent 33 to deal with their attackers, before noticing that Cal had freed himself and was eager to get his revenge. But before Whitehall could raise his gun, he is shot twice from behind by Coulson, killing him.

Using the body of a woman who survived the Obelisk's touch (Skye's Mother), he was able to rejuvenate himself.

Retrieved from "https://marvelcomicsfanon.fandom.com/wiki/Werner_Reinhardt_(Earth-1010)?oldid=259315"
Community content is available under CC-BY-SA unless otherwise noted.