See also Weapon X for a complete list of references to distinguish between these closely named or closely related articles. 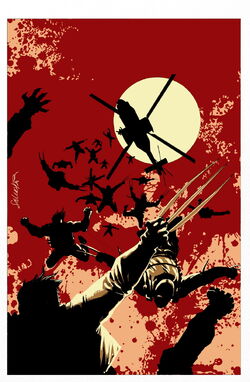 Weapon X was a code name for a secret US government project led by Major William Stryker Jr. intended to deliberately induce superpowers for military purposes. The mechanism was genetic engineering, specifically, creating mutations in normal humans and enhancing existing mutations. The successive projects had Roman numerals, so Weapon X was the tenth such project. Some confusion has arisen because this same name has applied to several different projects as well as several of the project's "graduates."

The first Weapon X project took place in the US in the 1960s, sponsored by the CIA.

In the 1970s the Weapon X project expanded into Canada, where it was run by Department K but still funded by the CIA.

Stryker located Wolverine and, in a secret lab (near Roanoke, Alberta province, Canada), augmented his skeleton with adamantium. Temporarily insane from pain, Wolverine massacred most of the lab personnel and escaped.

Other people related to Wolverine such as Sabretooth and Deadpool were brought in too.

The Weapon X project had reached the height of its power. They recruited Aurora and many more mutants. Some joined willingly. Most did not.

They retrieved Rebecca Shaffer's mortally wounded body from the road where Ultron had left her, got her back to prime health and gave her mutant powers.

Retrieved from "https://marvelcomicsfanon.fandom.com/wiki/Weapon_X_(Earth-1010)?oldid=135406"
Community content is available under CC-BY-SA unless otherwise noted.