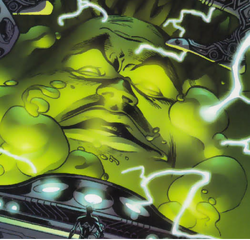 Earth-1010
Base Of Operations
The Marvel; Mobile across the Multiverse
Characteristics
Eyes

First appearance
Heroes (We Could Be)

Plex is also capable of manipulating energy and matter, as well as create up to three android servitors that act as its eyes and ears when away from itself. These androids possess some degree of independence when created, but are totally loyal to Plex.

It usually projects images of itself across space, cyberspace and even into the astral planes, in the form of a huge, amorphous, greenish, humanoid face, with tentacle-like "hair," to communicate with its agents scattered across the cosmos.

Its physical body is linked to Noh-Varr's ship; the destruction of this ship can in turn lead to Plex's destruction.

Retrieved from "https://marvelcomicsfanon.fandom.com/wiki/We-Plex_Supreme_Intelligence_System_(Earth-1010)?oldid=162825"
Community content is available under CC-BY-SA unless otherwise noted.