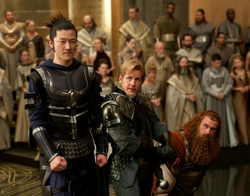 The Warriors Three were a group of Warriors and close allies of Thor since his youth. While they had many adventures alongside Thor, Loki and Sif, it was their unsanctioned attack on Jotunheim that left them most infamous. In this action they personally engaged both King Laufey and his army of jotuns, before Odin himself came to their rescue. While they were severely chastised over their indiscretion, it was Thor who had led them and thus Thor who suffered the greatest punishment when he was banished to Midgard (Earth).

With Thor absent, Loki soon placed himself on the throne of Asgard. The Warriors Three and Sif could do little to stop him and eventually resolved to carry news of Loki's Betrayal to Thor. To that end they approached Heimdall for assistance, and while he refused to actively aid them, he did turn his back and passively allow them to use the Bifrost in order to make the journey to Earth.

Loki then sent the Destroyer after the Warriors Three to prevent Thor from becoming a threat to his rule when they informed him of Loki's treachery. They swore to hold it off to protect the humans and the de-powered Thor, but the Warriors Three and Sif were quickly overpowered and defeated by the construct. Only when Thor himself stood up to the Destroyer, despite lacking his former power, did he become worthy to wield Mjolnir again. Once Thor had defeated the Destroyer, the Warriors Three returned with him to Asgard where they parted company to let Thor confront his treacherous brother alone.

Retrieved from "https://marvelcomicsfanon.fandom.com/wiki/Warriors_Three_(Earth-1010)?oldid=104765"
Community content is available under CC-BY-SA unless otherwise noted.