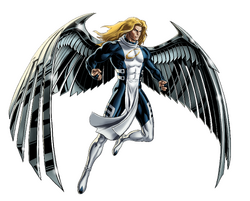 Whatever their limits, I was given these new powers for a reason, James. To use them. And that's exactly what I intend to do.

The Fallen's history is exactly the same as that of Earth-616's Warren Worthington III up until the Marvel NEW! relaunch.

When Galactus returned to Earth, he took Warren Worthington as his herald, transforming him into Starhawk. He spent much time flying around the cosmos before betraying Galactus and returning home. He rejoined the X-Men to get a handle on his powers, and to attempt to return to a sense of normalcy.

Mutant Physiology: the Fallen has his traditional Earth-616 powers.

Cosmic Power: As Galactus' Herald, the Fallen retains these powers:

Retrieved from "https://marvelcomicsfanon.fandom.com/wiki/Warren_Worthington_III_(Marvel_NEW!)?oldid=251739"
Community content is available under CC-BY-SA unless otherwise noted.