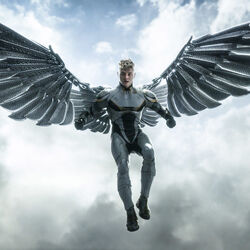 I take no pleasure in your death. Well, actually... I do.

Warren Worthington III was raised by his mutantphobic father, who taught him to hate himself. After Apocalypse began rising to power, Warren was one of the first mutants he recruited to be his Horseman of Death. Dedicating himself completely to Apocalypse, he slaughtered his father after having his wings coated in Adamantium.

He was dubbed Apocalypse's Archangel, and stood by him all the way to his overthrow of the United States of America. He now acts as the leader of the Horsemen, and the Commander of the entire Armada, carrying out whatever mission Apocalypse sends him on.

Years later, after dutifully serving Apocalypse, he and the other Horsemen discover a group of reality hoppers called the Outsiders have come to Earth-9999. With the Armada already declining, Apocalypse opts to transfer his consciousness into Archangel's body, which he views as an honor. His mind is essentially erased, and later his body would be destroyed in battle against the Outsiders.

Retrieved from "https://marvelcomicsfanon.fandom.com/wiki/Warren_Worthington_III_(Earth-9999)?oldid=255517"
Community content is available under CC-BY-SA unless otherwise noted.