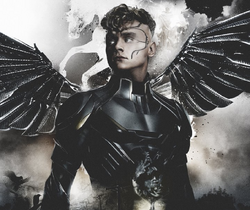 I may be as pretty as an angel, but I sure as hell ain't one.

Retrieved from "https://marvelcomicsfanon.fandom.com/wiki/Warren_Worthington_III_(Earth-9083)?oldid=241496"
Community content is available under CC-BY-SA unless otherwise noted.