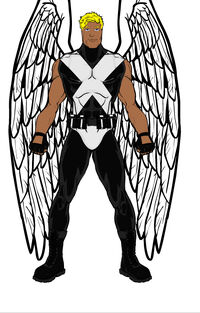 He is at peak physical strength for his age, and can lift up to 500 lbs.

He has a weakness for beautiful women.

Retrieved from "https://marvelcomicsfanon.fandom.com/wiki/Warren_Worthington_III_(Earth-515)?oldid=255515"
Community content is available under CC-BY-SA unless otherwise noted.