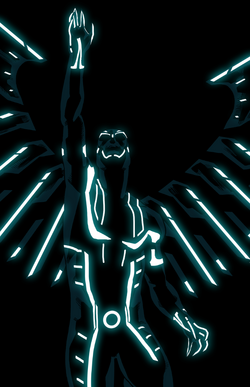 What's happening to me? My wings... changed! My skin, my face...darkening! Beast, you've always got the answers, what is going on?

Warren Worthington III is the son of Warren Worthington Jr. and Kathryn Worthington. He grew up the son of a millionaire, and he was always treated well. He only got the finest education. Later, he was sent off to a boarding school. At some point, his mutant powers developed, and he grew large wings which he could use to fly. When his school was attacked by assassins who wanted to murder the headmaster, Warren threw on a costume and defended the headmaster, calling himself the Avenging Angel.

Soon he became a more public figure as the Avenging Angel, and he drew the attention of Professor X. He was made a founding member of the X-Men, alongside Cyclops and Marvel Girl. He was very happy here, as he liked being among other mutants. However, he became very upset after Cyclops and Jean died. This immense stress, in fact, caused him to shift into his Archangel form. Shortly after this, the Brotherhood and the X-Men became one giant force for good.

While Professor X and Magneto were the heads of the new school, Archangel was allowed to be a field commander. Shortly after, the X-Men were abducted by Krakoa. A new team of X-Men was formed to rescue them. When fighting Krakoa and its monsters, Archangel fought viciously, and he was demoted to pure member of the X-Men following this. This angered him, and he would leave the team.

Soon he realized that he could not avoid the mutant life for long, so he decided that as great as the X-Men were doing, they needed another team to assist. So he started X-Factor, and he got Beast and Iceman to join. But Cerebro told them they needed more members, and he told them they should reenact the original X-Men. He then presented clones of Cyclops and Jean. Archangel told him that this was sick, and no one could ever replace them, but he insisted that if they did not take them, they would be shut down. So Archangel reluctantly accepted the clones, and X-Factor was formed.

Flight: Warren can fly by means of his natural feathered wings.

Body Adapted for Flight: Warren's body is virtually fatless and slim, he can lift as much as humans are physically capable of, and his eyes have adapted to see in high winds.

In his Archangel form, Warren has all of his other powers, with these additions...

Metal Wings: Archangel's metal wings allow him to fly at speeds of Mach I, and also allow him to project his "feathers."

Healing Factor: Archangel has a healing factor that protects him from disease and allows him to heal most non-fatal injuries in under 24 hours.

Fire Breath: Archangel has the ability to breathe fire.

Electrokinesis: Archangel can electrify his wings and project electricity from his hands. It is presumed he can also manipulate electricity, though this has yet to be seen.

Combatant: Archangel has basic knowledge of unarmed combat, and he excels at powered combat.

Retrieved from "https://marvelcomicsfanon.fandom.com/wiki/Warren_Worthington_III_(Earth-5)?oldid=59705"
Community content is available under CC-BY-SA unless otherwise noted.